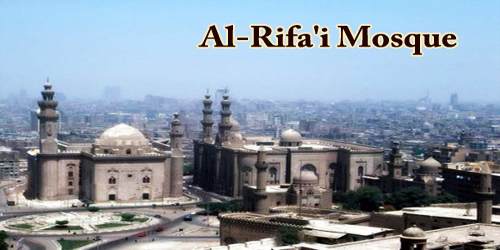 Al-Rifa’i Mosque (Arabic: مسجد الرفاعي‎, transliterated also as Al-Rifai, Al-Refai, Al-Refa’i, El-Refa’i, and named in English: the Refaai Mosque) is one of Cairo’s largest mosques. Construction of this beautiful sanctuary which combines various Islamic architectural styles took 43 years. The mosque is located in Midan Al-Qal’a (Arabic: ميدان القلعة‎), adjacent to the Cairo Citadel. Now, it is also the royal mausoleum of Muhammad Ali’s family. This mosque is the resting place for many members of the Egyptian Royal Family including King Farouk, the last king. Iran’s last Shah was buried in this tomb, too, in 1980. The building (Mosque) is situated opposite Sultan Hassan’s Mosque-Madrassa, which dates from about 1361, and was conceived architecturally as a complement to the older structure. The Al-Rifa’i Mosque was constructed in two phases over the period between 1869 and 1912 when it was finally completed. This monument marks a turning point in Egypt’s cultural and political history. It focuses on straight boulevards and open squares, two facets of European urban planning implemented during the reign of Muhammad Ali and his successors who wanted to turn the typical Egyptian culture into a cosmopolitan one. Designed as a freestanding shrine, the al-Rifa’i Mosque reacts to its site by displaying four entirely articulated facades in addition to a highly decorated dome and minaret in the Mamluk style. The original architect was Hussein Fahri Pasha, a distant cousin in the dynasty founded by Muhammad Ali of Egypt in 1803, but he died during the first phase of construction, and work was halted after Khedive Isma’il Pasha abdicated in 1880.

The building work for mosques was ordered to be resumed in 1905 by Abbas Hilmi II, who entrusted the completion of the mosque to Max Herz Bey, the Hungarian architect in charge of the Committee for the Protection of Arab Monuments in Cairo. Herz was assisted by the Italian architect Carlo Virgilio Silvagni and briefed by the minister of public works under Khedive Isma’il, Ali Pasha Mubarak. The mosque (Al-Rifa’i Mosque) was completed in 1912. The building itself is a melange of styles taken primarily from the Mamluk period of Egyptian history, including its dome and minaret, and Ancient Egyptian style pillars. The building includes a large hall of prayer, as well as the al-Rifa’i shrines and two other local saints, Ali Abi-Shubbak and Yahya al-Ansari. It reflects a historical and political change in Egypt, because of the time it took to construct the mosque. The entrance is dotted with columns of marble. Historicism here, however, is reduced to eclectic surface decoration; the axiality of the mosque and the abandonment of complex Mamluk spatial arrangements in favor of a rational design clearly represent the concern of the architect for 19th century. Classical revival of the beaux-arts.