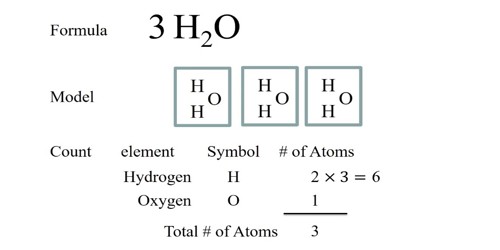 A chemical formula is a way that chemists describe a molecule. The formula says what atoms, and how many of each type, are in the molecule. It provides a lot of information about chemical substances, such as how many and what atoms they are made of, as well as the way the atoms are arranged. Sometimes the formula shows how the atoms are linked, and sometimes the formula shows how the atoms are arranged in space. It is defined as a collection of chemical symbol that is used to show the elements present in any compound and its proportion

A chemical formula is a simple representation, in writing, of a three-dimensional molecule that exists. They are another way to represent the number of atoms. Chemical formulas are used to represent kinds of atoms in a combination. These formulas use subscripts to tell how many of each atom are present in a combination. Subscripts are small numbers to the lower right of a symbol. They represent the number of atoms of that element in the equation. Before writing Chemical formulas, write down the symbol of each atom present in your equation. Writing chemical formulas is a way of informing the chemical figure. It is most easily found in the periodic table. The periodic table is a chart of all well-known parts.

Different elements are found in the periodic table. Each element has a family. An element family is an arrangement of elements. This element of the family has common properties. They are sharing the same characteristics.

Elements are displayed in order. Each element is put into families. There are three main categories such as metals, nonmetals, and semimetals. Each element family is displayed by the number of electrons in the outer shell.