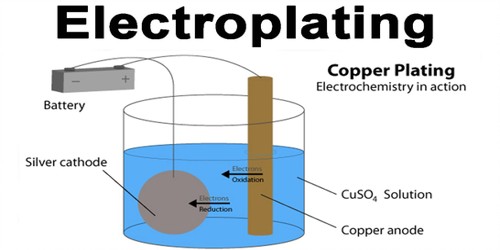 Electroplating is the coating of an object with a metal. It is done by immersing the object and a bar of the metal in a solution containing the metal ions. It is the process of plating one metal onto another by hydrolysis, most commonly for decorative purposes or to prevent corrosion of a metal. Electric current is then applied; the positive goes to the metal and the negative goes to the object. This is done by dipping two terminals called electrodes into the electrolyte and connecting them into a circuit with a battery or other power supply. The metal bar dissolves in the solution and plates out on the object, forming a thin but durable coating of metal. It is often used to gold-plate objects for decoration or to stop corrosion. The process itself involves creating an electrolytic cell: a device that uses electricity to deliver molecules to a particular location. Normally the metal becomes fragile and is only used for display.

It is known as electrodeposition because the process involves depositing a thin layer of metal onto the surface of a workpiece, which is referred to as the substrate. The Purposes of Electroplating: Appearance, Protection, Special surface properties, Engineering or mechanical properties, etc. 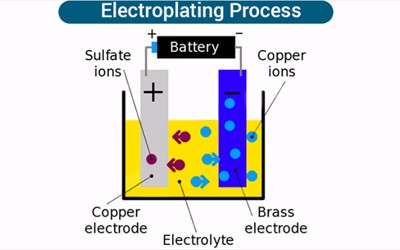 When an electric current is turned on, positive ions in the electrolyte move to the negatively charged electrode, called the cathode. Positive ions are atoms with one electron too few. When they reach the cathode, they combine with electrons and lose their positive charge.

Electroplating allows manufacturers to use inexpensive metals such as steel or zinc for the majority of the product and then apply different metals on the outside to account for appearance, protection, and other properties desired for the product. All kinds of metals can be plated in this way, including gold, silver, tin, zinc, copper, cadmium, chromium, nickel, platinum, and lead.

Some of the other common applications of electroplating involve: