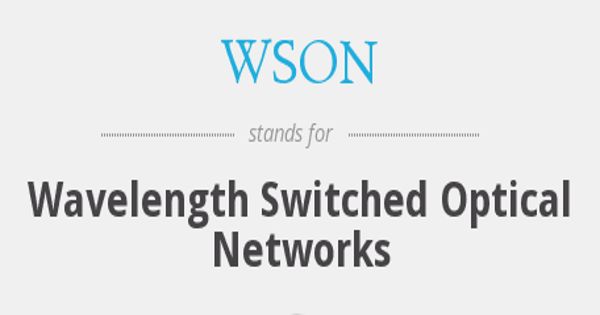 Wavelength Switched Optical Network (WSON) is a type of telecommunication network where data traffic flows through end-to-end optical connections (lightpaths) that are switched at the wavelength granularity over a fixed grid. WSON is a type of telecommunications network. WSON are Wavelength Division Multiplexing (WDM) based networks that include switching elements that can switch based on the wavelength or the frequency of signals transported over optical fiber.

Wavelength switched optical network (WSON) is a type of telecommunications network. A WSON consists of two planes: the data and the control planes.

A WSON consists of two planes: the data and the control planes. WSON requires that certain key information elements are made available to facilitate path computation and the establishment of label switching paths (LSPs). The data plane comprises wavelength-division multiplexing (WDM) fiber links connecting optical cross-connect (OXCs) through a comb of several tens of wavelength channels, with typical data rates of 10 or 40 Gbit/s. Part of the WSON information model contains aspects that may be of general applicability to other technologies, while other parts are fairly specific to WSONs. Optical end-to-end connections (i.e., lightpaths) are established in the optical domain and switched by OXCs at the wavelength granularity.

A Wavelength Switched Optical Network (WSON) requires certain key information fields to be made available to facilitate path computation and the establishment of Label Switched Paths (LSPs). The dynamic provisioning and maintenance of lightpaths are managed by the control plane. The control plane is implemented on a separate network and typically employs one network controller for each node in the data plane.

The basic WSON control plane standards thrust was divided into the following areas: