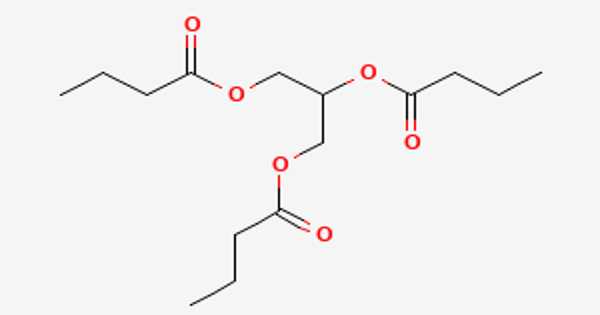 Tributyrin – an Ester Composed of Butyric Acid and Glycerol

Tributyrin is a triglyceride found naturally in butter. Butyric acid and glycerol are combined to form this ester. It is used in the production of margarine, among other things. It is found in butter and is described as a liquid fat with an acrid flavor. It has been used in clinical trials for the treatment of Prostate Cancer and Protocol Specific Unspecified Adult Solid Tumor.

It is a triglyceride of the short-chain fatty acid butyrate, also known as butyrin or tri-butyrate (sometimes called butyric acid or butanoic acid). Butyrin accounts for 3 to 4% of the butter. During the digestion of fiber and carbohydrates, the intestine produces short-chain fatty acids (acetate, propionate, and butyrate). It is a natural butyrate prodrug that has been evaluated with the goal of overcoming the pharmacokinetic drawbacks of natural butyrate as a drug, namely, its rapid metabolization and inability to achieve pharmacologic concentrations in neoplastic cells.

It is a normal constituent of colonic luminal contents and is formed in the mammalian digestive tract by bacterial fermentation of unabsorbed complex carbohydrates. It acts as a primary energy source in the normal colonic mucosa, promotes the growth of normal colonic epithelial cells in vivo and in vitro, and helps to prevent certain types of colitis. In contrast, it acts as a potent antineoplastic agent in a wide range of neoplastic cells, inhibiting growth and inducing differentiation, restoring normal phenotype and function.

In microbiological laboratories, butyrin is also used to identify the bacterium Moraxella catarrhalis.

Tributyrin is a triglyceride formed by the formal acylation of glycerol’s three hydroxy groups by butyric acid. It functions as an EC 3.5.1.98 (histone deacetylase) inhibitor, a protective agent, an inducer of apoptosis, a prodrug, and an antineoplastic agent. It is a butyrate ester and a triglyceride. It’s made from butyric acid.

Tributyrin is a butyric acid prodrug that enhances the antiproliferative effects of dihydroxycholecalciferol in human colon cancer cells. Several studies conducted over the last decade provide evidence that ir does, in fact, interfere with the pathogenesis of colorectal cancer.

Butyrates have been extensively studied and used as a feed additive in animal agriculture for several decades, first in calves to stimulate early rumen development and then in swine and poultry.