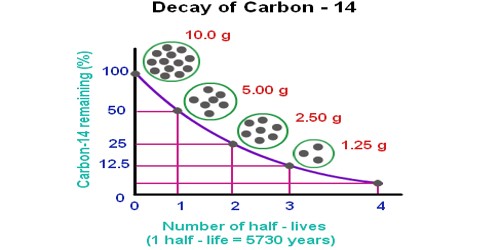 The half-life of a substance is the time it takes for half of the substance to decay. The term half-life is defined as the time it takes for one-half of the atoms of a radioactive material to disintegrate. The word “half-life” was first used when talking about radioactive elements where the number of atoms gets smaller over time. They are characteristic properties of the various unstable atomic nuclei and the particular way in which they decay. It is now used in many other situations where something declines exponentially. A Geiger-Muller detector can be used to measure the half-life; it is the time when the activity is half of the original.

Note that half-life is defined as a probability. Nuclear half-life expresses the time required for half of a sample to undergo radioactive decay. Half-life is the expected value when half the number of atoms have decayed. Carbon-14 has a half-life of 5,730 years. Taking one atom of 14C, this will either have decayed after 5,730 years, or it will not. But if this experiment is repeated, again and again, it will be seen that the atom decays within the half-life 50% of the time.

The half-life of a radioactive substance is a characteristic constant. Radioactive atoms have unstable nuclei. Their nuclei are unstable because the arrangement of protons and neutrons in them are unsteady. It measures the time it takes for a given amount of the substance to become reduced by half as a consequence of decay, and therefore, the emission of radiation. This is known as radioactive decay. For example, a radioactive carbon-14 atom releases a beta particle to become nitrogen-14. As an example of fission decay, a fermium-256 atom can split into xenon-140 and palladium-112 atoms, releasing four neutrons in the process.

A knowledge of radioactive half-life is important because –

Half-lives for various radioisotopes can range from a few microseconds to billions of years. After ten half-lives, over 99.9% of the radioactivity is gone. it refers to the amount of time it takes for half of the original isotope to decay. Then the material is only slightly radioactive and is sometimes treated as not harmful to people.