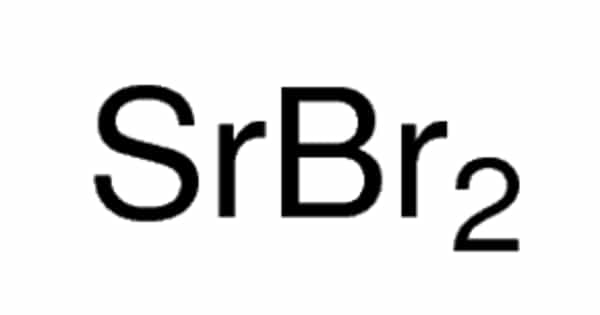 It is used in flares and has some pharmaceutical applications. Bromine, with the symbol Br and atomic number 35, is a halogen element. Although diatomic bromine does not exist in nature, bromine salts can be found in crustal rock.

Colorless crystals are formed by neutralizing hydrobromic acid with strontium hydrate. The crystals dissolve in water but not in alcohol. Strontium bromide was used to boost contrast in collodion emulsions on occasion.

It can be prepared by treating SrCO3 with a hydrogen bromide solution. Alternatively, a strontium salt (carbonate, sulfate, chloride, etc.) is treated with bromine or hydrobromic acid in presence of a reducing agent.

SrBr2 can be prepared from strontium hydroxide and hydrobromic acid.

Alternatively, strontium carbonate can also be used as a strontium source.

These reactions give hexahydrate of SrBr2, which decomposes to dihydrate at 89 °C. At 180 °C anhydrous SrBr2 is obtained.

Strontium bromide has a crystal structure with a tetragonal unit cell and space group P4/n at room temperature. This structure, known as α-SrBr2, is isostructural with EuBr2 and USe2. At approximately 920 K (650 °C), α-SrBr2 undergoes a first-order solid-solid phase transition to a much less ordered phase, β-SrBr2, which has a cubic fluorite structure. Due to extensive disorder in the bromide sublattice, the beta phase of strontium bromide has a much higher ionic conductivity of about 1 S cm1, comparable to that of molten SrBr2. At 930 K (657 °C), strontium bromide melts.

An ionic compound’s chemical formula is always equal to its empirical formula. In general, a compound is ionic when it contains a metal and a nonmetal that are bonded to one another. NaCl, for example, is an ionic compound composed of sodium cation (metal) and chloride anion (non-metal). The sum of the positive ions’ charges must equal the sum of the negative ions’ charges. The charge of the sodium ion (+1) in NaCl is equal to the charge of the chloride ion (-1).

It has a high potential for recovering, storing, and releasing low-grade heat (100 °C). SrBr2 is currently only manufactured on a lab scale, making it unsuitable for large-scale applications.