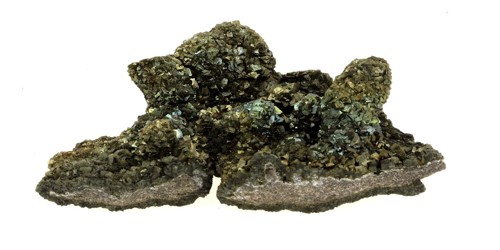 The mineral marcasite sometimes called “white iron pyrite”, is iron sulfide (FeS2) with an orthorhombic crystal structure. It is a yellow to silvery-yellow iron sulfide mineral. It forms by precipitation from acidic waters in surface or near-surface environments. It is a polymorph of pyrite. It is lighter and more brittle than pyrite. Specimens of marcasite often crumble and break up due to the unstable crystal structure. As a secondary mineral, it forms by chemical alteration of a primary mineral such as pyrrhotite or chalcopyrite.

Marcasite has historically been used as a source of sulfur; however, today it does not have any significant industrial use. It has a long history of use as a decorative and jewelry material. 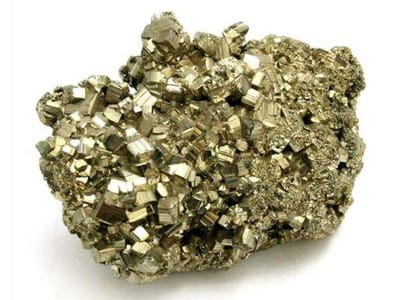 It is physically and crystallographically distinct from pyrite, which is an iron sulfide with a cubic crystal structure.  It rates a 6 to 6.5 on the hardness scale, is opaque, and has a beautiful glittering metallic luster. The structures differ in how these di-anions are arranged around the Fe2+ cations. On fresh surfaces, it is pale yellow to almost white and has a bright metallic luster. It tarnishes to yellowish or brownish color and gives a black streak.

Marcasite is commonly found in sediments, sedimentary rocks, and hydrothermal deposits in many parts of the world. It typically forms under low-temperature highly acidic conditions. It occurs in sedimentary rocks (shales, limestones, and low-grade coals) as well as in low-temperature hydrothermal veins. Commonly associated minerals include pyrite, pyrrhotite, galena, sphalerite, fluorite, dolomite, and calcite.

As a primary mineral it forms nodules, concretions, and crystals in a variety of sedimentary rock, such as in the chalk layers found on both sides of the English Channel at Dover, Kent, England, and at Cap Blanc Nez, Pas de Calais, France, where it forms as sharp individual crystals and crystal groups, and nodules (similar to those shown here).