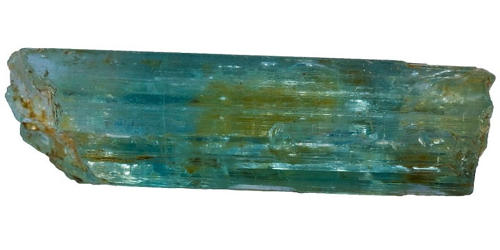 Beryl is a mineral composed of beryllium aluminum cyclosilicate with the chemical formula Be3Al2(SiO3)6. It was named after the Greek word beryllos. The original significance of the name is unknown, but it may refer to the blue-green stones in the mineral.

Well-known varieties of beryl include emerald and aquamarine. Naturally occurring, hexagonal crystals of beryl can be up to several meters in size, but terminated crystals are relatively rare. Pure beryl is colorless, but it is frequently tinted by impurities; possible colors are green, blue, yellow, red (the rarest), and white. 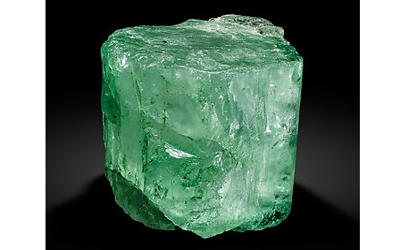 Beryl can be identified in the field by its color variations, such as green, blue, yellow, and pink. It is sometimes colorless. Its transparent to sub-translucent form has {0001} imperfect cleavage. This mineral has a vitreous – resinous luster, with a white streak. The fracture of this mineral is brittle – conchoidal.

Beryl occurs in granites and granite pegmatites, and, rarely, in nepheline syenites. It may occur in mafic metamorphic rocks, low to high-temperature hydrothermal veins, and in vugs in rhyolite. It is often associated with minerals such as quartz, topaz, feldspar, lepidolite, spodumene, muscovite, amblygonite, cassiterite, columbite, tantalite, and tourmaline.