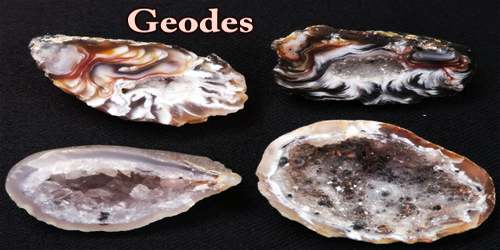 Geodes (derived from the Greek word “γεώδης” meaning “Earth-like”) are spherical to subspherical rock structures with an internal cavity lined with mineral materials. They have a durable outer wall that is more resistant to weathering than the surrounding bedrock. This allows the geode to survive intact when the surrounding bedrock weathers away. The mineral lining the cavity is often a scintillating druse of tiny quartz crystals underlain by multiple bands of translucent gray and white agate. Many are lined with more spectacular treasures.

Geodes are hollow, vaguely circular rocks, in which masses of mineral matter (which may include crystals) are secluded. The crystals are formed by the filling of vesicles in volcanic and sub-volcanic rocks by minerals deposited from hydrothermal fluids; or by the dissolution of syn-genetic concretions and partial filling by the same, or other, minerals precipitated from water, groundwater or hydrothermal fluids.

The common form is a slightly flattened globe ranging in diameter from 2.5 to more than 30 cm (1 to 12 inches) and containing a chalcedony layer surrounding an inner lining of crystals. The hollow interior often is nearly filled with inward-projecting crystals, new layers growing on top of old. The crystals are of quartz, less often of calcite or dolomite, and sometimes of aragonite, ankerite, hematite, magnetite, pyrite, chalcopyrite, and sphalerite. Most often the metal sulfides are innermost, and a layer of calcite is next to the outer chalcedonic layer; a second layer of chalcedony sometimes is present.

Rich purple amethyst, perfect white calcite crystals, and colorful banded agate are other common linings. Rare geodes can be filled with beautiful blue gem silica, pink rhodochrosite, spectacular opal with vivid play-of-color or other rare materials. Geodes range in size from under one centimeter to several meters in length. From the outside most geodes look like common rocks, but when they are opened the sight can be breathtaking. 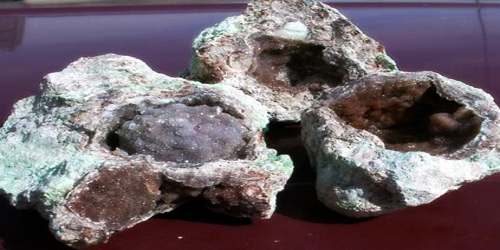 Occurrence and Formation of Geodes –

Geodes are often named according to a particular feature or mineral they exhibit or mention where the particular geodes were found. Common informal names for geodes include: quartz geodes, amethyst geodes, agate geodes, enhydro geodes, Oco geodes, Keokuk geodes, coconut geodes, etc. Thunder eggs may occur as geodes or nodules.

In 2000 a team of geologists found a cave filled with giant gypsum crystals in an abandoned silver mine near Almería, Spain. The cavity, which measures 1.8 × 1.7 meters and is 8 meters in length, would be the largest crystal cave ever found. The entrance of the cave has been blocked by five tons of rocks, and is under police protection (to prevent looters from entering). According to geological models, the cave was formed during the Messinian salinity crisis 6 million years ago, when the Mediterranean sea evaporated and left thick layers of salt sediment). The cave is currently not accessible to tourists.

The world’s largest known crystal cave or vug is Crystal Cave, a celestine geode 35 feet (10.7 m) in diameter at its widest point, located near the village of Put-in-Bay, Ohio, on South Bass Island in Lake Erie.

Geodes are not found randomly here and there. Instead they are usually found in large numbers in areas where the rocks have formed in a special geochemical environment. Most geodes localities are in A) stratified volcanic deposits such as basalts and tuffs; or B) stratified sedimentary carbonate deposits such as limestone’s and dolomites. A diversity of other environments yield a small number of geodes.

The most widely known and sought-after geodes are those that formed in areas of volcanic activity. Voids in basaltic lava flows often are infilled with agate, quartz, opal and other material delivered by hydrothermal water or groundwater. Some voids are spaces occupied by gases that failed to escape the lava flow before its surface crusted over.

Geodes form by expansion from an initial fluid-filled cavity, such as the opening in a bivalve. The initial deposit, chalcedony, forms from a silica gel that surrounds and isolates the salt solution. If the water surrounding the forming geode becomes less saline, osmosis begins to bring the salinity inside into equilibrium with that outside (water seeps in, diluting the trapped solution), and the internal pressure increases. The geode will expand in response to the pressure, either at the expense of the surrounding limestone, which dissolves at the limestone-silica interface, or, if the limestone has not hardened, by pushing aside the lime mud. Expansion continues until the pressure difference becomes negligible. If the initial cavity is inside a fossil, the fossil is burst by the expanding geode. Ultimately, dehydration and crystallization of the silica gel occur, followed by shrinkage, cracking, and the entrance of water carrying dissolved minerals, which are deposited on the chalcedony wall.

Geode banding and coloration is the result of variable impurities. Iron oxides will impart rust hues to siliceous solutions, such as the commonly observed iron-stained quartz. Most geodes contain clear quartz crystals, while others have purple amethyst crystals. Still others can have agate, chalcedony, or jasper banding or crystals such as calcite, dolomite, celestite, etc. There is no easy way of telling what the inside of a geode holds until it is cut open or broken apart. However, geodes from a particular area are usually similar in appearance.

Geodes and geode slices are sometimes dyed with artificial colors. Samples of geodes with unusual colors or highly unlikely formations have usually been synthetically altered.

Bigger geodes can help create a chi flow in areas of our home. Many see geodes as a feminine property due to the cavity which could represent the womb. Geodes can help communicate with divine beings and assist in creating better moods, balances, and energies that can help with meditation, stress, and decision-making. Their multiple uses come from the fact that crystal formations vary and each crystal varies in minerals held. Across the board, they have many health benefits and promote well-being.