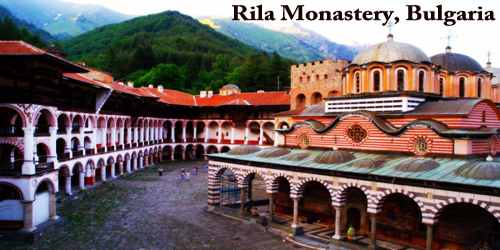 The Monastery of Saint Ivan of Rila, better known as the Rila Monastery (Bulgarian: Рилски манастир, Rilski manastir) historic monastery and cultural site in the Rhodope Mountains of southwestern Bulgaria. It is situated in a valley of the Rila massif, some 70 miles (110 km) south of Sofia. Rila is a symbol of Bulgarian national identity, and it is the most prominent monastery of the Bulgarian Orthodox Church. The monastery is named after its founder, the hermit Ivan of Rila (876 – 946 AD), and houses around 60 monks.

Rila Monastery was founded in the 10th century by St John of Rila, a hermit canonized by the Orthodox Church. His ascetic dwelling and tomb became a holy site and were transformed into a monastic complex which played an important role in the spiritual and social life of medieval Bulgaria. Destroyed by fire at the beginning of the 19th century, the complex was rebuilt between 1834 and 1862. A characteristic example of the Bulgarian Renaissance (18th–19th centuries), the monument symbolizes the awareness of a Slavic cultural identity following centuries of occupation.

Apart of being a holly place for the Orthodox church, the monastery is also a spiritual, cultural, and religious centre for all Bulgarians. During the 5 centuries when Bulgaria was under Othoman domination, the Rila monastery has been preserving the christianity and the culture of the country. It has also served as shelter for the persecuted revolutionaries and educational centre for all Bulgarians. 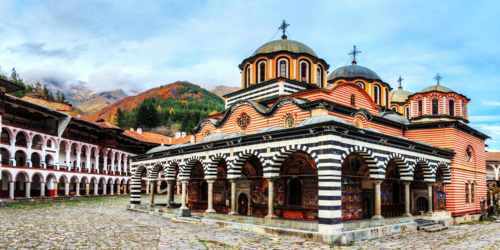 The first Christian monastery in Bulgaria, Rila was founded by the hermit John of Rila (Yoan of Rila, in Bulgarian Ivan Rilski), who is the traditional patron saint of Bulgaria. Rila grew rapidly in power and influence from the 13th to the 14th century. After a devastating fire, it was rebuilt and fortified (c. 1334–35) in its present location by the feudal lord Khrelio (also spelled Hrelyo or Hreljo). During the Ottoman Turkish occupation (14th–19th centuries) and the accompanying cultural domination of Bulgaria by Greece, Rila again flourished, in part owing to its isolation from Ottoman power centers.

Architectural styles have been preserved on the property as historical monuments of considerable time span (11th-19th c.). The basic architectural appearance is now one of the peak examples of building craftsmanship of the Balkan peoples from the early 19th c. As such it has exerted considerable influence on architecture and aesthetics within the Balkan area. Along with other church properties, the monastery fell under direct control of the post-World War II communist regimes. Unlike most other religious sites, however, Rila was granted protected status (1961) by the Bulgarian government.

In the 18th and 19th centuries Rila was a cradle for the “National Revival” of Bulgaria. The monastery supported book publishing, a library and archives, and various educational institutions. It also attracted a large number of pilgrims.

The monastery is known as being one of the hideouts of Bulgarian revolutionaries such as Vassil Levski, Gotse Delchev, Peyo Yavorov, etc. The monastery complex, regarded as one of the foremost masterpieces of Bulgarian National Revival architecture, was declared a national historical monument in 1976 and became a UNESCO World Heritage Site in 1983. Since 1991 it has been entirely subordinate to the Holy Synod of the Bulgarian Orthodox Church.

On 25 May 2002, Pope John Paul II visited the Rila monastery during his pilgrimage to Bulgaria. He was greeted by the Monastery’s igumen, Bishop Ioan, who had been an observer at the Second Vatican Council.

The main sections standing today were constructed in the early to the mid-19th century in an irregularly shaped polygon. Within its imposing frame are hundreds of dormitory rooms and halls, as well as archives and museums of history and ethnography. The relics of St. John of Rila are also on display. The whole complex occupies an area of 8,800 m² and is rectangular in form, centered on the inner yard (3,200 m²), where the tower and the main church are situated.

The main church “The Nativity of the Virgin” – The main church “The Nativity of the Virgin” is located in the formed frame of the monastery’s frame. It is in a unique symbiosis with the medieval Hreliov’s tower. It has five domes which are a special architecture decision, taken by the master Pavel Ivanovich, who wanted to break up its size and built it in some follower wings. That was done because the new church was bigger than the previous one and it didn’t fit with the other architectural forms.

Residential Part – The four-storey (not counting the basement) residential part of the complex consists of 300 chambers, four chapels, an abbot’s room, a kitchen (noted for its uncommonly large vessels), a library housing 250 manuscripts and 9,000 old printed matters, and a donor’s room. The exterior of the complex, with its high walls of stone and little windows, resembles a fortress more than a monastery.

The Hreliov’s Tower – However, the Hreliov’s tower gives us full notion of the character of the fortress building trough the whole period of the mature Bulgarian feudalism. It was built in 1334-1335 and devoted to St. Joan Rilsky and The Virgin Mother Osenovica. It is an evidence for the technical and artistic skills of the medieval masters.

The access to the inside of the tower is only to the first floor, where is the only one entrance now you can get in there only with wood stairs, which firstly were step-ladder. The access inside is realized by wide stone stairs, built-in thick walls. In that way each of the four floors has united cleared room. They were obviously considered for temporary living in defense from attacks. There were some convenience of the life as wood floors, a little day-light, place for sink (on the second floor).

The chapel on the fifth floor is the biggest interest of the scientists. It has lots of very beautiful and colorful frescos. The chaple “Transfiguration of God” is part of the oldest monastic chaples. Its frescos are dated from the 14 century and they are very valuable monument of Bulgarian medieval art. What the other elements of the chapel were and in what purpose it was used we won’t know, because it was destroyed by a fire. However, we could consider that it wasn’t a place for a big religious services and it was accessible only for the monks and there was no effort it to be painted again.

Built as a fortress, the monastery relies to self-protection and has only two entrances, which are well safeguarded with thick and iron gates, which in case of attack make the monastery’s yard unreachable. However, its function is well hidden with beautiful decorations and the national purpose of the monastery is shown in these frescos. The gates of the monastery are widely opened for the people who believe and call them to get into the fireplace of the true Bulgarian faith and promise deliverance and happiness. 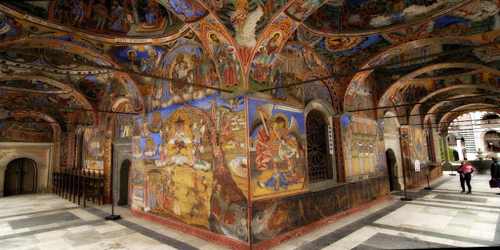 Monastery Museum – The museum of the Rila Monastery is particularly famous for housing Rafail’s Cross, a wooden cross made from a whole piece of wood (81×43 cm). It was whittled down by a monk named Rafail using fine burins and magnifying lenses to recreate 104 religious scenes and 650 miniature figures. Work on this piece of art lasted not less than 12 years before it was completed in 1802 when the monk lost his sight.

The monastery is also famous for its library where lots of important Bulgarian written records are kept safe: about 250 manuscripts from XI-XIX century, 9000 old-printed books, and others.

Rila Monastery is the most important spiritual and literary center of the Bulgarian national revival, with an uninterrupted history from the middle ages until present times. Reconstruction work was required following a fire and sections of the monastery, a new church and other structures date to the 18th century. The property fully endorses authenticity requirements regarding location, context, concept, usage, function, and tradition, where the spirit and feeling of the site are also properly preserved.