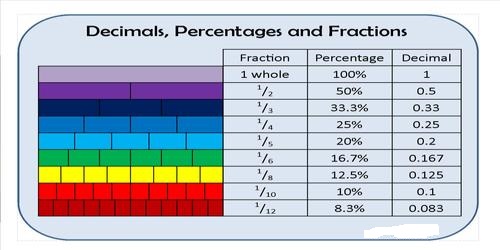 A fraction is a part of a whole. It is written with a number on top, the numerator, and a number on bottom, the denominator, with either a slanted slash or a horizontal slash between the two numbers. You can think of fractions in terms of pies. The fraction 3/4, for example, means that if you cut a piece of pie into 4 slices, then 3 of those slices are yours. 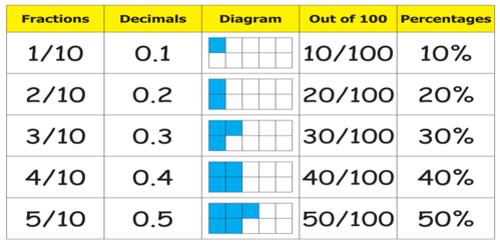 Some common Equivalent Decimals and Fractions:

Changing to a Fraction from a Decimal

First, let’s see how to go from a decimal to a fraction. It’s actually quite simple. Let’s try converting 7.89.

So, we count the number of digits we have after the decimal point. We count 2, so we will have 2 zeroes on the bottom following our 1. So, our decimal 7.89 turned into a fraction is 7 89/100. This is a mixed fraction.

See if you can turn 0.3 into a fraction. How many decimal spaces do we have? We have 1. So, how many zeroes will we have after the 1 in our denominator? We will have 1 zero. So, our fraction is 3/10.

We left our fractions as they are in both of these cases because they are already as reduced as they can be. If, however, we ended up with a fraction such as 8/10, we could reduce it to 4/5.

How to Subtract Feet and Inches?