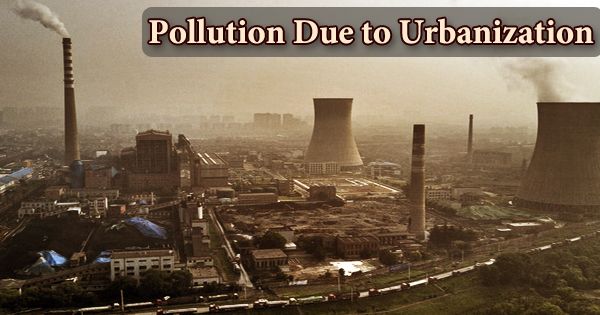 Pollution Due to Urbanization

Over the last few decades, pollution has become an increasingly urgent issue. Pollution comes in many forms, including air pollution, noise pollution, water contamination, and soil pollution, all of which are extremely destructive to the ecosystem. Humans have a significant difficulty when their environment deteriorates on a daily basis. Pollution is defined as the mixing of any dangerous material or pollutants in our natural environment. Many contaminants are introduced into the natural environment as a result of human activities, contaminating it to dangerous proportions. Pollution is caused by a variety of factors, one of which being urbanization. Pollution occurs when contaminants disrupt the environment, and there are four different types of pollution. The hazardous and toxic pollutants in the air caused by vehicles, factories, smoking, and other sources are referred to as air pollution. The poisoning of water bodies by harmful compounds, plastic, oil spills, and other factors is referred to as water pollution. Soil pollution, also known as land pollution, refers to the waste we leave on the ground as well as hazardous compounds that seep into the soil and deplete its fertility. Unwanted and unpleasant noises are referred to as noise pollution; all sorts of pollution are extremely harmful to the environment. When human beings began to form cities and industrialization occurred, pollution levels began to rise. Many attractive valleys, mountains, hilltop stations, and forests have been turned into pollution carriers as a result of development. Human needs continued to grow, and in order to meet them, we plundered our mother earth. Trees were felled, rivers and lakes were polluted, and natural resources were exploited. As a result, we now live in heavily polluted cities where day-to-day life has become increasingly difficult. We are suffering from a variety of health problems as a result of urban pollution, and the worst thing is that we are completely unaware of it. While pollution is a serious problem in our world on its own, pollution caused by urbanization is a major one. Furthermore, as urbanization encroaches on even the tiniest of regions, it is becoming a growing problem. Yes, development is to be praised, but not to the point of endangering or ruining the environment. There are several levels at which urban pollution occurs, such as:

Pollution from numerous sources in metropolitan areas can cause a variety of health problems for city dwellers. While progress is beneficial because it creates opportunities for thousands of people, it is not worth it if it results in unmanageable pollution that is harmful to the environment. Ice and glaciers are melting due to global warming. The melting ice led all of the oceans’ sea levels to rise. Lower coastal areas will be flooded as the sea level rises. Warming, according to scientists, will result in an increase in severe storms. It could also result in more flooding in some areas and more drought in others. The interaction of the urban population with the environment resulted in a number of major issues. The urban population’s spending patterns and lifestyle drastically altered the environment. Food, energy, and water consumption are all higher in cities. The air in cities is far more polluted than in rural places. This is primarily due to the increased usage of automobiles and the expansion of industries and factories that pollute the air. Almost all of the devices we use are powered by electricity. The demand for electricity in cities is always increasing, necessitating the construction of additional power plants, which pollute the air. The negative aspect of urbanization is the manufacturers, which emit a great deal of pollution. They emit smoke into the atmosphere, pollute water streams and the surrounding land, and generate a lot of noise with their equipment. As a result, there is a lot of pollution as a result of urbanization, and it is extremely destructive to the environment as it begins. To suit the requirements of city dwellers, more trees are being taken down, and fewer trees are being planted in their place. The use of plastic is another major reason of the degradation of the environment. There is an urgent need to mobilize a large-scale campaign to raise awareness about these issues. Digitization is beneficial, but it must be done in a controlled manner so that we can progress while still ensuring the safety of our environment. It is our responsibility to leave a clean environment and a safe world for future generations.