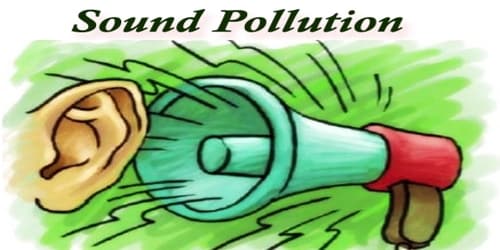 Man’s normal tolerance limit of sound is 45 decibels. When this limit exceeds 45 decibels, it is called sound pollution. There are many causes of sound pollution. The horns and whistles of different vehicles plying on the roads are polluting the environment a lot. Besides, the drivers often press the horns unnecessarily even near the schools and hospitals, which causes serious problems to the Students and patients. Moreover, our young generation has a peculiar fascination towards listening to music at high volume. Various shops and hotels at the roadsides also tune their audio system loudly to attract customers. Mikes and loudspeakers are also used on many occasions without considering any limit. Shouting slogans on the roads as well as on the campuses of colleges and universities tell upon the peaceful atmosphere. The sounds of mills and factories also contribute to sound pollution. The people living in the cities or towns, workers at mills and factories, primary schools teachers, etc. are exposed to sound pollution. There are many bad impacts of sound pollution. According to the WHO, around 5% of the world population is facing several kinds of health hazards due to complexities related to sound pollution. Around 11.7% of the populations in Bangladesh have lost their hearing due to sound pollution. Owing to sound pollution, the normal rate of heartbeat increases and blood pressure rises. It causes lack of concentration and irritability. It also accelerates the outbursts of rage. After all, if we live in a noisy environment continuously, we may gradually become deaf. Many developed countries are trying to control sound pollution by careful town planning and developing public awareness. I think, to check sound pollution, we should get all to be aware of the bad effects of sound pollution.