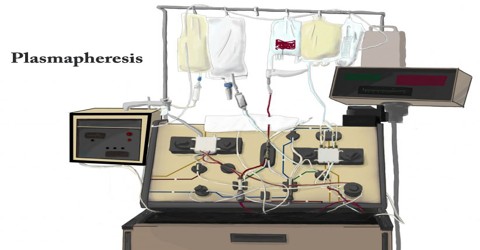 Plasmapheresis is a process in which the liquid part of the blood, or plasma, is separated from the blood cells. Typically, the plasma is replaced with another solution such as saline or albumin, or the plasma is treated and then returned to our body. This is also known as plasma exchange. A machine can be used to remove the affected plasma and replace it with good plasma or a plasma substitute. The process is similar to kidney dialysis. It also can refer to the plasma donation process, where the plasma is removed and the blood cells are returned to our body. Plasmapheresis is used in the treatment of many different conditions, including autoimmune disorders. When the plasma is removed, it takes with it the antibodies that have been developed against self-tissue in an attempt to reduce the attack on the patient’s own body. Plasmapheresis carries with it the same risks as any intravenous procedure but is otherwise generally safe. Three general types of plasmapheresis can be distinguished: Plasmapheresis can be used to treat a variety of autoimmune disorders including:

In each of these disorders, the body has developed proteins called antibodies that are programmed to identify cells and destroy them. These antibodies are in plasma. Normally, these antibodies are directed at foreign cells that may harm the body, such as a virus. It can also be used to treat certain complications of sickle cell disease, as well as certain forms of neuropathy. It has also been used to help people who have received an organ transplant to counter the effect of the body’s natural rejection process.

Benefits and Risks of Plasmapheresis

If anyone receiving plasmapheresis as a treatment for weakness or an autoimmune disorder, they may begin to feel relief in as little as a few days. For other conditions, it may take a few weeks before they notice any changes in their symptoms. Plasmapheresis will only provide short-term relief. Often the process will need to be repeated. The frequency and length of results are highly dependent on your condition and its severity. Patients doctor or nurse can give them a general idea of how long plasmapheresis will be effective for and how frequently they need to use it.

Plasmapheresis does carry a risk of side effects. Usually, they are rare and generally mild. The most common symptom is a drop in blood pressure. This is often accompanied by:

Infection: Most procedures involving transfer of blood into or out of the body carry a risk of infection.

Allergic reaction: This is typically a reaction to the solutions used to replace plasma.

Plasmapheresis may not be an appropriate treatment for some people, including: