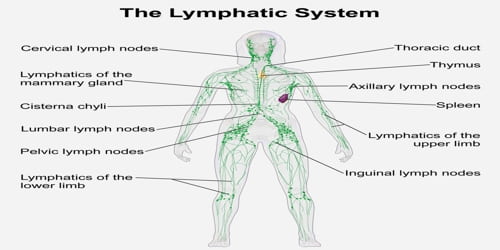 Definition: Lymphatic System is a collection of organs, tissues, ducts, and vessels that help to make or transport lymph. Lymph is a clear-to-white fluid circulating in the vessels and ducts of the lymphatic system that contains white blood cells, proteins, and fat. It was first described in the seventeenth century independently by Olaus Rudbeck and Thomas Bartholin. The human circulatory system processes an average of 20 liters of blood per day through capillary filtration, which removes plasma while leaving the blood cells. Roughly 17 liters of the filtered plasma is reabsorbed directly into the blood vessels, while the remaining three liters remain in the interstitial fluid. One of the main functions of the lymph system is to provide an accessory return route to the blood for the surplus three liters.

There are about 600 lymph nodes in the body. These nodes swell in response to infection, due to a build-up of lymph fluid, bacteria, or other organisms and immune system cells.

A person with a throat infection, for example, may feel that their “glands” are swollen. Swollen glands can be felt especially under the jaw, in the armpits, or in the groin area. These are, in fact, not glands but lymph nodes.

The system has special small vessels called lacteals. These enable it to absorb fats and fat-soluble nutrients from the gut. 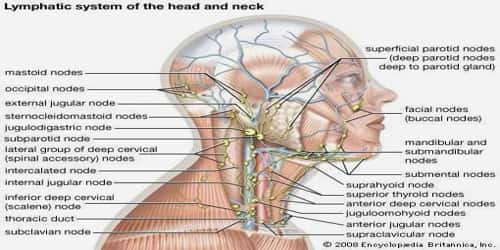 Structure and Functions of Lymphatic System: The lymphatic system consists of lymphatic organs, a conducting network of lymphatic vessels, and the circulating lymph.

Secondary or peripheral lymphoid organs, which include lymph nodes and the spleen, maintain mature naive lymphocytes and initiate an adaptive immune response. Secondary lymphoid tissue provides the environment for the foreign or altered native molecules (antigens) to interact with the lymphocytes. It is exemplified by the lymph nodes and the lymphoid follicles in tonsils, Peyer’s patches, spleen, adenoids, skin, etc. that are associated with the mucosa-associated lymphoid tissue (MALT).

Fluid balance: The lymphatic system helps maintain fluid balance. It returns excess fluid and proteins from the tissues that cannot be returned through the blood vessels. The fluid is found in tissue spaces and cavities, in the tiny spaces surrounding cells, known as the interstitial spaces. These are reached by the smallest blood and lymph capillaries.

Around 90 percent of the plasma that reaches tissues from the arterial blood capillaries is returned by the venous capillaries and back along veins. The remaining 10 percent is drained back by the lymphatics.

The immune system: The lymphatic system plays a major role in the body’s immune system, as the primary site for cells relating to an adaptive immune system including T-cells and B-cells. Cells in the lymphatic system react to antigens presented or found by the cells directly or by other dendritic cells. When an antigen is recognized, an immunological cascade begins involving the activation and recruitment of more and more cells, the production of antibodies and cytokines and the recruitment of other immunological cells such as macrophages.

If the immune system is not able to fight off these micro-organisms, or pathogens, they can be harmful and even fatal.

A number of different immune cells and special molecules work together to fight off the unwanted pathogens.