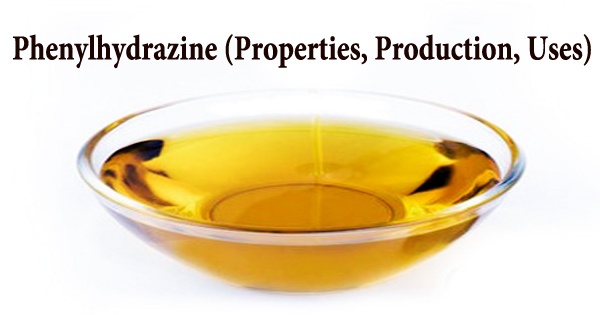 The chemical compound phenylhydrazine, also known as hydrazinobenzene, has the formula C6H5NHNH2 and is commonly abbreviated as PhNHNH2. It takes the form of light golden crystals. 66°F melting point It turns into an oily liquid. Ingestion, inhalation, and skin absorption are all toxic. 192°F flash point; 345°F autoignition temperature; alcohol soluble. It can also be found in mushrooms that are edible. However, the pharmacological potential of this molecule is restricted. It is now utilized in animal research as a chemical substance to cause anemia.

Hermann-Emil-Fischer, a German organic chemist, successfully synthesized phenylhydrazine in 1875, making it the first synthetic hydrazine derivative. It is a pale yellow crystalline or oily liquid at normal temperature, and monoclinic prismatic crystals form at low temperatures. It is readily oxidized in the air and develops a dark brown or dark red color. When phenylhydrazine is exposed to air, it produces monoclinic prisms that melt into an oil at normal temperature, becoming yellow to dark red.

Ethanol, diethyl ether, chloroform, and benzene are all miscible with phenylhydrazine. It’s a phenylhydrazine, which is hydrazine’s monophenyl derivative. It functions as a xenobiotic and is only slightly soluble in water. The most common way of producing it is by the reaction of aniline with sodium nitrite in the presence of hydrochloric acid to produce diazonium salt, which is subsequently reduced by sulfite/sodium reduction. Acid precipitation can result in the formation of phenylhydrazine hydrochloride, which can then be neutralized to produce phenylhydrazine.

Fischer utilized phenylhydrazine to describe sugars by forming osazones from hydrazones formed by the sugar aldehyde. He also proved many of the important characteristics of hydrazines in this initial article. The process is based on aniline, which is produced through diazotization, reduction, acid precipitation, and neutralization in that order. Polycythemia vera has been treated with phenylhydrazine in clinical trials. However, because to its toxicity and the availability of more effective treatments, it is no longer utilized in clinical practice.

Skin and eye irritation are possible side effects of phenylhydrazine, and there is evidence that it has skin sensitizing characteristics in people. Exposure to phenylhydrazine can harm red blood cells, leading in anemia and subsequent involvement of other organs including the spleen and liver. Phenylhydrazine is effectively absorbed through the inhalation, oral, and cutaneous routes in animals and people, according to evidence from toxicokinetic and toxicity studies and human experience.

The Fischer indole synthesis uses phenyl-hydrazine to make indoles, which are intermediates in the production of many colors and medicines. It is mutagenic in vitro, and some data suggests that it may have genotoxic properties in vivo. Following oral administration, the chemical is definitely carcinogenic in mice, causing vascular tumors. To the reduction kettle, add sodium bisulfite and a 30% alkaline solution, heat to 80°C, keep at 80°C and pH = 6.2~6.7 for 20 minutes, then trickle in the aforementioned diazo solution. Stirring was continued for 1.5 hours before adding zinc powder, diatomaceous earth, and stirred filtrate into the acid precipitation tank.

To the above filtrate, add 30% hydrochloric acid for acid precipitation at 70 °C; the temperature is kept between 85 and 90 °C, stir for 10 minutes, cool to below 20 °C, suck, and filter to yield phenylhydrazine hydrochloride. Although the complete metabolic pathway for phenylhydrazine has not been identified, it is extensively metabolized after oral administration. The main reactions discovered in this study were hydroxylation of the aromatic ring to p-hydroxyphenylhydrazine, conjugation, most likely with glucuronic acid, and production of phenylhydrazones via reaction with natural keto acids.

Phenylhydrazine is used to create phenylhydrazones from natural mixtures of simple sugars, allowing the sugars to be easily separated from one another. Although the exact mechanism of tumor formation is unknown, a genotoxic component cannot be ruled out. As a result, it is not believed that a level of exposure at which there is no risk of carcinogenic or genotoxic effects can be reliably identified. Aryl hydrazine is a type of aryl hydrazine that is used to make a variety of dyes and pharmaceutical compounds. It’s used to look into oligosaccharides as well as the structure of photosystem II.

The mechanism of action has been proposed to include indirect alkylation of DNA, a finding that is also linked to the toxic endpoint. Contact dermatitis, hemolytic anemia, and liver damage are all possible side effects of phenylhydrazine exposure. Phenylhydrazine is a common reagent used in the analysis of sugars, aldehydes, and ketones. It’s also used to make dyes, pharmaceuticals like antipyrin, cryogenin, and pyramidone, as well as other organic chemicals. In the treatment of polycythemia vera, the hydrochloride salt is used.