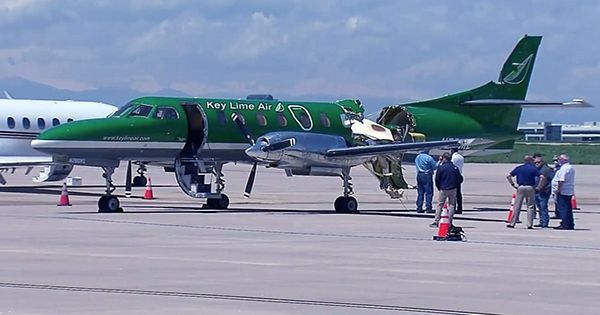 Plane Almost Ripped in Half as Two Aircraft collide Mid-Air, yet no One is Injured

On Wednesday, two small planes collided in the middle, one was torn in half and the other was forced to release the plane’s parachute to land on a rock in safety.

Surprisingly, the pilot of the badly damaged plane simply believed that no engine had failed and requested to land at a small airport in Denver, then they landed successfully and realized the amount of damage. Even more miraculously, no pilot or single passenger on the plane was injured in the collision. Officials at the scene said it was indeed a significant event, as mid-plane crashes of high-speed aircraft rarely occurred.

“Each of these pilots has to buy a lottery ticket right now,” Arapaho County Sheriff’s Deputy John Bartmann told AP News. “I don’t remember anything like that – especially when everyone walks. I mean, it’s an amazing part of it.” The two aircraft include the Cyrus SR22, a small single-engine aircraft, and the Fairchild Swearingen Metroliner SA 226 TC, as well as many larger twin-turboprop aircraft that can hold up to 19 people. According to reports, they were about to land at a centennial airport and were flying over Cherry Creek State Park when air traffic control noticed how close the two planes were.

Cyrus was warned to turn around and fly west as he approached the Metroliner – but only a few seconds later Cyrus plowed straight into the middle of the big plane. After the collision, the Metroliner pilot spoke to air traffic control and said they were unaware of the collision, aiming to continue their landing. “Looks like the right engine failed, so I’ll continue my landing,” the pilot said in the audio clip.

Meanwhile, Cyrus Sirius deployed airframe parachute systems that release a parachute and allow the aircraft to crash in a controlled manner and reduce the chances of injury. The system seems to have worked wonders as the plane landed safely on the ground. An investigation is underway into how the clash happened.

Mid-air collisions are incredibly rare, with proper air traffic control, shipping equipment, and pilots’ sharp eyes keeping themselves out of the way of other aircraft. The last mid-air collision was in May, where two float planes collided more than 3,000 feet. The clashes were even more horrific, with six casualties and many more seriously injured, so this is truly a lucky day for those who have been able to escape the loss.