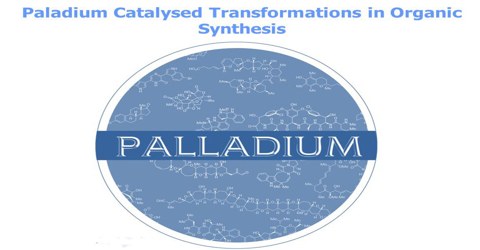 In 2010, the Nobel Prize in Chemistry was awarded to Richard F. Heck, Ei-ichi Negishi and Akira Suzuki for their work on palladium-catalyzed cross couplings in organic synthesis. 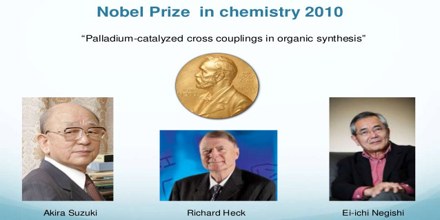 It is an active area of research and applications in homogeneous catalyst. The principle of palladium-catalyzed cross couplings is that two molecules are assembled on the metal via the formation of metal-carbon bonds. In this way the carbon atoms bound to palladium are brought very close to one another. In the next step they couple to one another and this leads to the formation of a new carbon-carbon single bond. There are two types of cross-coupling reactions according to this principle that have become important in organic synthesis.

The palladium-catalyzed carbon-carbon bond forming reactions developed by Heck, Negishi and Suzuki have had a large impact on synthetic organic chemistry and have found many applications in target oriented synthesis. Their widespread use in organic synthetic applications is due to the mild conditions associated with the reactions together with their tolerance of a wide range of functional groups. These three cross-coupling reactions have been applied to the synthesis of a large number of natural products and biologically active compounds of complex molecular structures. They have also found applications in the fine chemical and pharmaceutical industries. 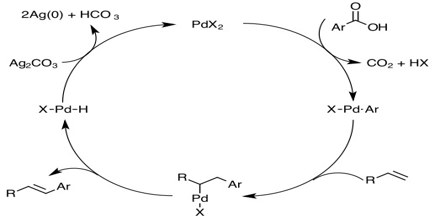 Some of the applications of the Laureates’ pioneering work on carbon-carbon bond formation have already been discussed. It is important to emphasize the great significance their discoveries have for both academic and industrial research and in the production of fine chemicals – including pharmaceuticals, agricultural chemicals, and high tech materials – that benefit society. Few reactions have contributed to enhancing the efficiency of organic synthesis as much as the palladium-catalyzed cross-coupling reactions. These reactions have changed the practice of the science of synthesis and they are used for making complex molecules producing both natural products and biologically active compounds.

Unoptimized reactions typically use 10-15 mol% of palladium. In optimized reactions, catalyst loadings can be on the order of 0.1 mol % or below. Palladium nano clusters have been found to catalyze coupling reactions with catalyst loadings as low as parts per billion, however such systems typically do not maintain catalytic activity as long as well defined ligated catalysts. Many exotic ligands and chiral catalysts have been reported, but they are largely not available commercially, and do not find widespread use. Much work is being done on replacing the phosphine ligands with other classes, such as Arduengo-type carbene complexes, as the phosphine ligands are typically oxygen sensitive (easily oxidized) and must be handled under an inert atmosphere. Phosphines are labile, sometimes requiring additional ligand. 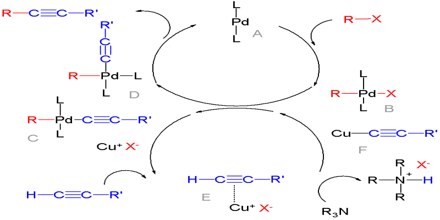 The palladium-catalyzed cross-coupling of organic electrophiles with vinyl organotin compounds is today known as the Stille reaction, after the late Professor J. K. Stille who pioneered (1978) and subsequently developed this reaction, although the seeds of discovery were sown earlier by Kosugi and his group, who published the first reports of transition-metal-catalyzed carbon-carbon bondforming reactions with organotin compounds a year earlier. Nearly 30 years later the Stille reaction remains one of the most widely applied palladium-catalyzed carbon–carbon bond-forming reactions, in large part due to typically mild reaction conditions, the ease of preparation of a wide range of coupling partners, and the tolerance of a wide variety of sensitive functionalities in this transformation. In particular, the number of ingenious and daring applications of Stille couplings in the challenging proving ground of total synthesis bears testament to the faith placed in the robustness and versatility of this reaction by practitioners of this art. Notably, the Stille reaction can be viewed as a variation of the Heck reaction in which a hydrogen atom is replaced by a tin-bearing substituent.

Historically, the use of organozinc reagents as the nucleophilic component in palladium-catalyzed cross-coupling reactions, known as the Negishi coupling actually predates the development of both the organostannane- (Stille, 1978) and organoborane-based (Suzuki, 1979) procedures, with the first such examples being reported in 1977. Nevertheless, the rapid and widespread embracement of the latter two protocols by synthetic chemists during the 1980s led to the potential of organozinc reagents in cross-coupling processes being relatively underappreciated and underutilized during this time, particularly in total synthesis.

Organozinc reagents exhibit a very high intrinsic reactivity in palladium-catalyzed cross-coupling reactions, which combined with the availability of a number of procedures for their preparation and their relatively low toxicity, makes the Negishi coupling an exceedingly useful alternative to other cross-coupling procedures, as well as constituting an important method for carbon–carbon bond formation in its own right.

As amply demonstrated above, total synthesis has benefited enormously from the palladium-catalyzed cross-coupling reactions that have emerged in the last few decades.

These marvelous tools allow the artisans of this flagship discipline of chemical synthesis to flourish and produce some of the most stunning masterpieces in the history of total synthesis. To be sure, the ever-growing expansion of these carbon–carbon bond-forming reactions into new vistas will undoubtedly enable even more impressive accomplishments in the future.

Just as the Grignard, Diels–Alder, Wittig, and hydroboration reactions as well as asymmetric oxidation and hydrogenation of double bonds enabled quantum leaps in our ability to construct complex molecules in the laboratory, so do the carbon–carbon cross-coupling reactions. In particular, these processes do not require the preparation of reactive intermediates prior to the carbon–carbon bondforming event. Rather, they proceed by activation of stable and readily available starting materials in situ and, therefore, are both more practical and often more efficient in terms of overall yield. And beyond these processes, and fortunately for synthetic chemists, who have been empowered so much by them, a new group of reactions catalyzed by transition metals have appeared on the horizon. 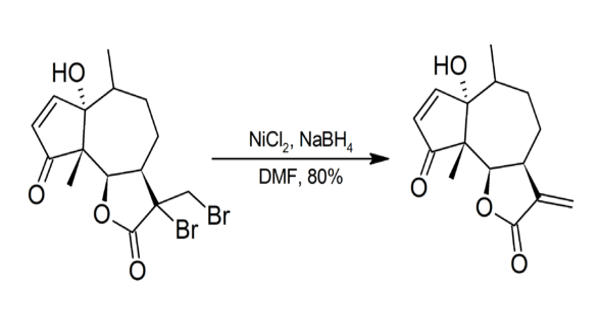 Trinickel Boride – a Compound of Nickel and Boron