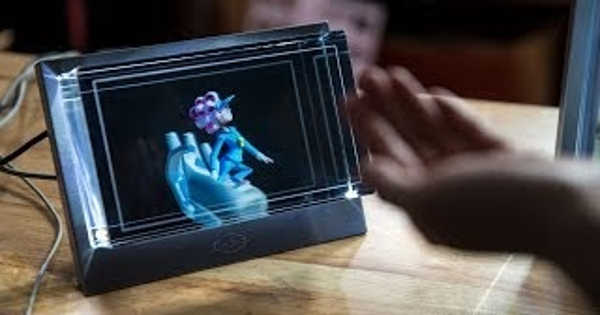 When viewing a holographic display, the brain is immediately fooled by the illusion of a physical object or real-world environment mixed with the three-dimensional digital overlay. The visual experience immediately evokes emotions and triggers the senses, resulting in increased activity in the cortex, allowing the viewer to process and retain the information communicated more effectively.

Looking Glass, a maker of holographic displays, has announced the development of two versions of its second-generation holographic display. The team at Looking Glass provides a video on its website demonstrating the features that buyers can expect from the two new products, the 4K Gen2 and the 8K Gen2, both powered by what the company refers to as its advanced light-field technology.

A holographic display works by having a high-definition or 4K screen reflect digital content through glass with a special coating known as glass optics. When positioned at a specific angle, the glass optic creates an illusion that causes your brain to perceive the digital content as three-dimensional. This is what gives the illusion of a free-floating hologram in front of your eyes.

3D holographic displays enable the creation of a visual brand experience that leverages the power of neuromarketing. The seemingly free-floating holograms have the natural ability to make people stop and pay attention in any crowded setting, whether it’s a retail store, an expo, or a public space.

The new products are updated to Looking Glass Portrait, the company’s first-generation holographic display. Those were available for as little as $249 through a Kickstarter campaign. The second-generation devices are much more expensive, costing $3,000 for the 4K version and $17,500 for the 8K version.

The second-generation models do not represent a technological advancement; rather, they are a size and quality improvement. The Portrait has a 7.9-inch display, while the 4K version has a 15.6-inch display and the 8K version has a 32-inch display. The two new models are also lighter and thinner, with methods to reduce ambient reflections. All three of the company’s devices can convert and display photographs taken with a smartphone (via a Looking Glass app) into 3D pictures or videos that appear to be from a moving camera.

The devices are compatible with 3D programs such as Unity, Unreal Engine, and Blender, allowing users to create a wide range of content. Users can also share their content with other Looking Glass users. Both of the new second-generation devices are now available for purchase directly through the Looking Glass website.

The new models will succeed their predecessors, which were essentially developer units rather than mainstream consumer products (though the company will continue to offer support). In addition to being less expensive, the second-generation units are lighter and have better visual fidelity than their predecessors — especially around the edges, where holographic displays can have issues.

Holograms can be used in a variety of industries and sectors where technical information must be communicated in a clear and exciting manner. Aside from attracting attention, holographic displays enable complex brand- or product stories to be communicated to any bystander in seconds. When an object, product, or artifact is placed inside the display, the digital overlay can present special features, highlight details, or explain unique selling points in a visual way that the viewer quickly absorbs.