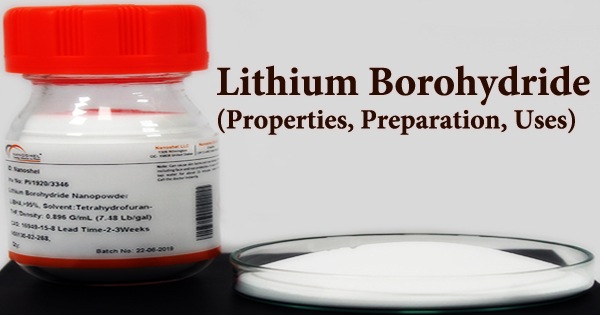 Lithium borohydride (LiBH4) is a powerful reducing agent that can convert esters to alcohols and primary amides to amines in a combination of methanol and diethyl ether. The lithium salt, while less common than the related sodium borohydride, has certain benefits, such as being a stronger reducing agent and being highly soluble in ethers, while staying safer to handle than lithium aluminum hydride. It’s a powerful reducing agent that’s mostly employed in organic synthesis to reduce carbonyl groups like aldehydes, ketones, and esters.

The use of this product is particularly favorable in various preparations due to its greater chemoselectivity. The metathesis process, which happens when sodium borohydride and lithium bromide are ball-milled together, may be used to make lithium borohydride:

It may also be made by combining boron trifluoride and lithium hydride in diethyl ether:

Lithium borohydride is a white orthorhombic crystal with a density of 0.67 g/cm3 that decomposes in moist air. It melts at 268°C and decomposes at 380°C. It interacts with water and dissolves in ether, tetrahydrofuran, and diethylamine. It is a more powerful reducer than sodium borohydride. Lithium borohydride may convert esters to alcohols and primary amides to amines in methanol and diethyl ether combinations. Ereztech produces and sells this product in both small and large quantities. Packaging options include glass ampules, bottles, metal ampules, and bubblers.

Alternatively, the compound may be obtained by the reaction of ethyllithium with diborane:

The polarization of the carbonyl substrate caused by complexation with the lithium cation is thought to be the cause of the increased reactivity. Due to its greater chemoselectivity than other common reducing agents like lithium aluminum hydride, lithium borohydride is particularly beneficial in specific formulations. Lithium borohydride, unlike lithium aluminum hydride, can decrease esters, nitriles, lactones, primary amides, and epoxides while preserving nitro groups, carbamic acids, alkyl halides, and secondary/tertiary amides.

Lithium borohydride is a powerful reducing agent that is easy to light and burns rapidly once lit. When it comes into contact with water or acids, it produces hydrogen gas as well as corrosive compounds. After a wait, a reaction with a little quantity of water or moisture may produce ignite. It has a reputation for being one of the most energy dense chemical energy carriers. When treated with air oxygen, the solid will release 65 MJ/kg of heat, despite the fact that it is currently of no practical relevance.

The oxidation of liquid lithium borohydride yields 43 MJ/L due to its density of 0.67 g/cm3. Gasoline produces 44 MJ/kg (or 35 MJ/L), while liquid hydrogen produces 120 MJ/kg (or 8.0 MJ/L). Inhalation of fumes, substances, or decomposition products, as well as contact with them, can result in serious damage or death. When water comes into touch with it, it can generate corrosive solutions. Gases that are irritating, caustic, and/or poisonous are produced by fire. Pollution may result from firefighting runoff.

Lithium borohydride has a high specific energy density, making it an appealing option for automotive and rocket fuel, but despite study and promotion, it has not been extensively employed. Used in the reduction of compounds containing ketonic, aldehydic, or ester carbonyls and a nitrile group, when the carbonyl group is to be reduced but not the nitrile group. Lithium borohydride, like all chemical-hydride-based energy carriers, is difficult to recycle (i.e. recharge) and hence has a low energy conversion efficiency.

Only the ester groups, not the peptide bonds, are decreased in the determination of free carboxyl groups in peptides and proteins following esterification and acetylation. In the presence of a nitrile group, lithium borohydride is also utilized to selectively reduce a carbonyl group. Lithium aluminum hydride, a much stronger reducing agent, cannot accomplish such selective reduction. Free carbonyl groups in proteins and peptides are also detected using this chemical.