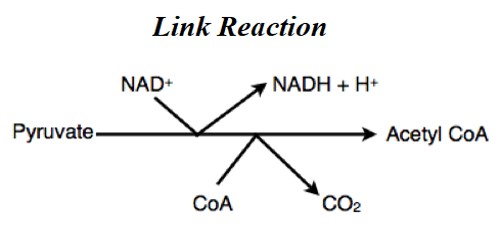 The Link reaction, also known as pyruvate decarboxylation forms an important link between the metabolic pathways of glycolysis and the citric acid or Krebs cycle. The link reaction is named thus because it links the products of glycolysis with the aerobic processes of the mitochondria.

The Link Reaction is the second stage in respiration, it converts pyruvate into Acetyl CoA to allow the Krebs Cycle to take place. In eukaryotes, the reaction takes place only inside the mitochondrial matrix; in prokaryotes, similar reactions take place in the cytoplasm and at the plasma membrane. Pyruvate molecules are oxidized and converted to acetyl-coenzyme A, usually abbreviated to acetyl CoA. Pyruvate is modified by the removal of a carboxyl group followed by oxidation and then attached to Coenzyme A. 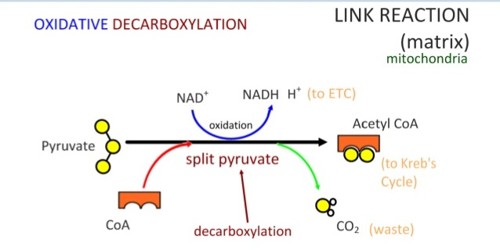 Acetyl CoA is then ready for use in the Krebs Cycle. Acetyl CoA brings chemical energy into the cycle in the form of a two-carbon acetyl group.

The Link reaction is important as acetyl-CoA is needed for the Krebs cycle to happen. At the start of the Krebs cycle, enzymes detach the two-carbon acetyl group from Acetyl CoA and attach it to a four-carbon molecule called oxalic acid. The purpose of the link reaction is to convert pyruvate into acetyl which is needed for the Kreb Cycle, the next process in cellular respiration.