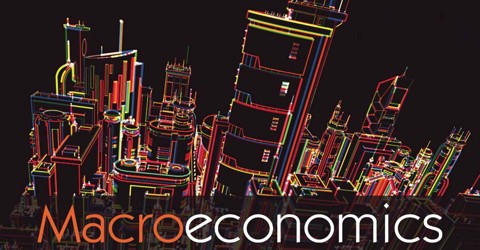 Macroeconomics is the branch of economics concerned with the study of aggregate economic activity. In macroeconomics, a variety of economy-wide phenomena is thoroughly examined such as, inflation, price levels, rate of growth, national income, gross domestic product and changes in unemployment. It focuses on trends in the economy and how the economy moves as a whole. Macroeconomics is concerned primarily with the forecasting of national income, through the analysis of major economic factors that show predictable patterns and trends, and of their influence on one another. These factors include level of employment/unemployment, gross national product (GNP), balance of payments position, and prices (deflation or inflation). Macroeconomics also covers role of fiscal and monetary policies, economic growth, and determination of consumption and investment levels.

It is a broad field of study, there are two areas of research that are emblematic of the discipline: the attempt to understand the causes and consequences of short-run fluctuations in national income (the business cycle), and the attempt to understand the determinants of long-run economic growth (increases in national income). Macroeconomic models and their forecasts are used by governments to assist in the development and evaluation of economic policy. Macroeconomics is a rather broad field, but two specific areas of research are representative of this discipline. One area involves the process of understanding the causation and consequences of short-term fluctuations in national income, also known as the business cycle. The other area involves the process by which macroeconomics attempts to understand the factors that determine long-term economic growth, or increases in the national income.

Macroeconomics encompasses a variety of concepts and variables, but there are three central topics for macroeconomic research. Macroeconomic theories usually relate the phenomena of output, unemployment, and inflation. Outside of macroeconomic theory, these topics are also important to all economic agents including workers, consumers, and producers. Cause and Effect of Macroeconomics

Thomas Sargent has shown how structural macroeconometrics can be used to analyze permanent changes in economic policy. This method can be applied to study macroeconomic relationships when households and firms adjust their expectations concurrently with economic developments. Sargent has examined, for instance, the post-World War II era, when many countries initially tended to implement a high-inflation policy, but eventually introduced systematic changes in economic policy and reverted to a lower inflation rate.

Christopher Sims has developed a method based on so-called vector autoregression to analyze how the economy is affected by temporary changes in economic policy and other factors. Sims and other researchers have applied this method to examine, for instance, the effects of an increase in the interest rate set by a central bank. It usually takes one or two years for the inflation rate to decrease, whereas economic growth declines gradually already in the short run and does not revert to its normal development until after a couple of years.

Although Sargent and Sims carried out their research independently, their contributions are complementary in several ways. The laureates’ seminal work during the 1970s and 1980s has been adopted by both researchers and policymakers throughout the world. Today, the methods developed by Sargent and Sims are essential tools in macroeconomic analysis. A macroeconomic factor is a factor that is pertinent to a broad economy at the regional or national level and affects a large population rather than a few select individuals. Macroeconomic factors such as economic output, unemployment, inflation, savings and investment are key indicators of economic performance and are closely monitored by governments, businesses and consumers.

A macroeconomic factor can include anything that influences the direction of a particular large-scale market. Items such as fiscal policy and various regulations can impact the economy of a state or nation, and can even have international implications. Not all macroeconomic factors are negative, such as those that promote economic growth.