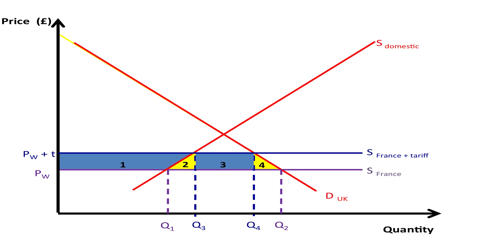 Trade creation refers to the increase in economic welfare from joining a free trade area, such as a customs union. It is an economic term related to international economics in which trade flows are redirected due to the formation of a free trade area or a customs union. When countries make trade agreements to have more free trade among them it is trade creation.  The issue was first brought into discussion by Jacob Viner (1950), together with the trade diversion effect.

Trade creation will occur when there is a reduction in tariff barriers, leading to lower prices. In the former case after the formation of an economic union, the cost of the goods considered is decreased, leading to an increase in the efficiency of economic integration. This switch to lower-cost producers will lead to an increase in consumer surplus and economic welfare. This comes about as the removal of trade barriers allows greater specialization according to comparative advantage. This means that prices can fall and trade can thus expand.

When customs unions have established the flow of trade between countries involved in the new union and that outside will be affected. The opposite takes place in case of trade diversion when the trade flow is diverted from actually cost-efficient partner state to less efficient one – but which became a member of economic union and made its goods cheaper within a union, but higher compared to the rest of the world. This will not benefit consumers within the union as they are not getting access to cheaper international goods. In practice, both trade creation and diversion effects take place due to the formation of an economic union. The efficiency of the economic integration of specific unions right now is assessed as a final outcome between trade creation and diversion effects: it is cost-effective in case of prevailing of the trade creation effects, and vice versa.

However, there are more potential benefits of reducing tariffs. If you cut import tariffs, other countries are likely to reciprocate and reduce tariffs on your exports. Therefore, there will also be an extra benefit from increased exports. The important thing of this analysis is that a country can have an increase in economic welfare by cutting import duties – even if they are not reciprocated.

The occurrence of trade creation

Trade creation is the creation of an area in which countries can trade goods without restrictions. Trade creation and diversion are important to the direct effects of the formation of a customs union. When a customs union is formed, the member nations establish a free trade area amongst themselves and a common external tariff on non-member nations. Trade diversion, on the other hand, means that trade shifts from a lower-cost producer outside the union to a higher-cost producer inside the union. This area then creates a redirection of the flow of goods to a different country that uses imported goods instead of those produced locally. As a result, the member nations establish greater trading ties between themselves now that protectionist barriers such as tariffs, import quotas, non-tariff barriers, and subsidies have been eliminated. Since the goods are often obtained for cheaper prices because of the lack of restrictions and tariffs, consumers can purchase the goods at a reduced price. The result is an increase in trade among member nations in the good or service of each nation’s comparative advantage. In other words, an increase in trade causes greater revenues, (more profitable). It is important to point out though, that by importing a cheaper good, trade creation often puts local producers out of business.