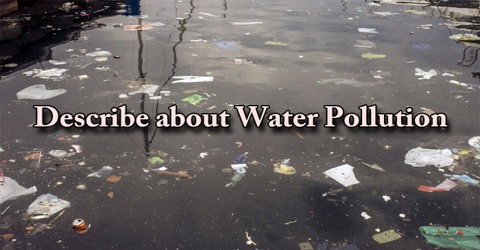 Over two thirds of Earth’s surface is covered by water; less than a third is taken up by land. As Earth’s population continues to grow, people are putting ever-increasing pressure on the planet’s water resources. In a sense, our oceans, rivers, and other inland waters are being “squeezed” by human activities—not so they take up less room, but so their quality is reduced. Poorer water quality means water pollution. Pollution is a human problem because it is a relatively recent development in the planet’s history: before the 19th century Industrial Revolution, people lived more in harmony with their immediate environment. As industrialization has spread around the globe, so the problem of pollution has spread with it. When Earth’s population was much smaller, no one believed pollution would ever present a serious problem. It was once popularly believed that the oceans were far too big to pollute. Pollution is one of the signs that humans have exceeded those limits. Water pollution is the contamination of water bodies (e.g. lakes, rivers, oceans, aquifers and groundwater). This form of environmental degradation occurs when pollutants are directly or indirectly discharged into water bodies without adequate treatment to remove harmful compounds.

Water pollution affects the entire biosphere – plants and organisms living in these bodies of water. In almost all cases the effect is damaging not only to individual species and population, but also to the natural biological communities.

Water pollution almost always means that some damage has been done to an ocean, river, lake, or other water source. A 1969 United Nations report defined ocean pollution as:

“The introduction by man, directly or indirectly, of substances or energy into the marine environment (including estuaries) resulting in such deleterious effects as harm to living resources, hazards to human health, hindrance to marine activities, including fishing, impairment of quality for use of sea water and reduction of amenities.”

Beyond synthetic pollution, freshwater is also the end point for biological waste, in the form of human sewage, animal excrement, and rainwater runoff flavored by nutrient-rich fertilizers from yards and farms. These nutrients find their way through river systems into seas, sometimes creating coastal ocean zones void of oxygen—and therefore aquatic life—and making the connection between land and sea painfully obvious.

Types and Causes of Water Pollution

The most obvious type of water pollution affects surface waters. For example, a spill from an oil tanker creates an oil slick that can affect a vast area of the ocean. Surface waters and groundwater are the two types of water resources that pollution affects. There are also two different ways in which pollution can occur. If pollution comes from a single location, such as a discharge pipe attached to a factory, it is known as point-source pollution. Other examples of point source pollution include an oil spill from a tanker, a discharge from a smoke stack (factory chimney), or someone pouring oil from their car down a drain. A great deal of water pollution happens not from one single source but from many different scattered sources. This is called nonpoint-source pollution. There are two main ways of measuring the quality of water. One is to take samples of the water and measure the concentrations of different chemicals that it contains. If the chemicals are dangerous or the concentrations are too great, we can regard the water as polluted. Measurements like this are known as chemical indicators of water quality. Another way to measure water quality involves examining the fish, insects, and other invertebrates that the water will support. If many different types of creatures can live in a river, the quality is likely to be very good; if the river supports no fish life at all, the quality is obviously much poorer. Measurements like this are called biological indicators of water quality.

Most water pollution doesn’t begin in the water itself. Take the oceans: around 80 percent of ocean pollution enters our seas from the land. Virtually any human activity can have an effect on the quality of our water environment. When farmers fertilize the fields, the chemicals they use are gradually washed by rain into the groundwater or surface waters nearby. Sometimes the causes of water pollution are quite surprising. Chemicals released by smokestacks (chimneys) can enter the atmosphere and then fall back to earth as rain, entering seas, rivers, and lakes and causing water pollution. That’s called atmospheric deposition. Water pollution has many different causes and this is one of the reasons why it is such a difficult problem to solve.

Oxygen-depleting substances may be natural materials such as plant matter (e.g. leaves and grass) as well as man-made chemicals. Other natural and anthropogenic substances may cause turbidity (cloudiness) which blocks light and disrupts plant growth, and clogs the gills of some fish species.

Pollution is a necessary evil that people must put up with if they want to make progress. Fortunately, not everyone agrees with this view. One reason people have woken up to the problem of pollution is that it brings costs of its own that undermine any economic benefits that come about by polluting. Take oil spills, for example. They can happen if tankers are too poorly built to survive accidents at sea. But the economic benefit of compromising on tanker quality brings an economic cost when an oil spill occurs. The oil can wash up on nearby beaches, devastate the ecosystem, and severely affect tourism. The main problem is that the people who bear the cost of the spill, typically a small coastal community are not the people who caused the problem in the first place the people who operate the tanker. Sewage is another good example of how pollution can affect us all. Sewage discharged into coastal waters can wash up on beaches and cause a health hazard. People who bathe or surf in the water can fall ill if they swallow polluted water—yet sewage can have other harmful effects too: it can poison shellfish, such as cockles and mussels that grow near the shore. People who eat poisoned shellfish risk suffering from an acute—and sometimes fatal—illness called paralytic shellfish poisoning. Shellfish is no longer caught along many shores because it is simply too polluted with sewage or toxic chemical wastes that have discharged from the land nearby.

Pollution matters because it harms the environment on which people depend. The environment is not something distant and separate from our lives. It’s not a pretty shoreline hundreds of miles from our homes or a wilderness landscape that we see only on TV. The environment is everything that surrounds us that gives us life and health. Destroying the environment ultimately reduces the quality of our own lives—and that, most selfishly, is why pollution should matter to all of us.