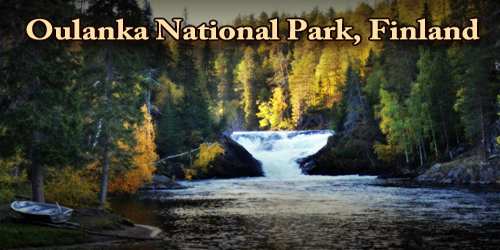 Oulanka National Park (Finnish: Oulangan kansallispuisto) is a national park in the Northern Ostrobothnia and Lapland regions of Finland, covering 270 square kilometers (104 sq mi). The Park, along with six others, was established in 1956. The first section of the Karhunkierros Hiking Trail, leading to the sights of Oulanka from the Sallantie Road starting point to the Taivalköngäs Rapids, had been marked a year earlier. After all these eventful years, Oulanka stands today as an internationally recognized protection area, whose appeal is based on a diverse and unique mixture of southern, northern and eastern natural features.

Pressed right up against the border with Russia, in Finnish Lapland, Oulanka National Park is a playground for those who enjoy the outdoors. Oulanka’s forests and valleys are an ideal place for hikers, while the River Oulankajoki is a great spot to go canoeing. For those after picturesque scenery you’re also in luck. Spots like Oulanka Canyon and Ristikallio Cliffs offer up impressive views while still being easily accessible to non-hikers.

The first inhabitants in the area were Sami people from Lapland who lived here until the end of the 17th century, which was when they had to give way to Finnish settlers. Although hunting, fishing and later farming was the primary occupation of the people who lived there, today the most notable activity in Oulanka is tourism. From the 1930s, the Finnish Tourist Association kept boats on the river and renovated the wooden cabins found across the park for accommodation purposes. These cabins can be used free of charge by any hikers in the area, given that they follow some basic guidelines and rules regarding the state of the cabins, the wood supply, and protecting the surrounding nature. 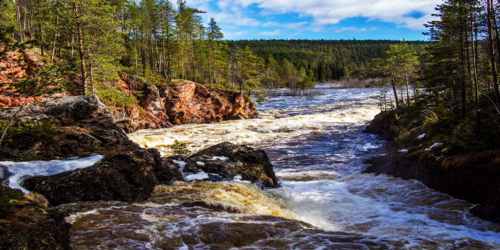 Oulanka National Park was established in 1956 and was expanded in 1982 and 1989. It borders the Paanajärvi National Park in Russia. The area that is now Oulanka National Park has been famous already since the late 19th century for its breathtaking scenery, wild rapids, and exceptional plants. Kuusamo was suggested as a possible location for a National Park already in 1897. Scientists Vilho Pesola and Einari Merikallio drew up maps of the area in the beginning of the 20th century, with the financing of the chocolate and confection manufacturer Karl Fazer. Many Finnish artists also visited the area.

The process of establishing the National Park was, at first, slowed down by a general parceling out land and then by the Second World War. It was further hindered by the conflict about the future of the Kuusamo rapids, when there were plans to harness the Rivers Oulankajoki and Kitkajoki for the production of electricity in the 1950’s. Finally, people realized that promoting nature conservation helped tourism and the rapids remained unharnessed. The late Reino Rinne, a journalist, and author from Kuusamo was a spokesperson for nature conservation at the deciding moment.

Oulanka National Park is a unique and versatile combination of northern, southern, and eastern nature. The landscape is made up of pine forests, river valleys with sandy banks and rapids, and in the north of vast mires. It has a unique river ecosystem and is an example of untouched and unlogged boreal forest, close to the Arctic Circle, which is protected by World Wide Fund for Nature from intensive reindeer herding. The area is rich in animal and plant species, even endangered ones. Near the visitor’s center is the Oulanka Research Center, which is part of the Thule Institute and was established in 1966 to facilitate research in biological and geological sciences. The research center also offers its facilities to visiting tourists or hikers, during the less busy seasons.

War History – The Winter War and Continuation War did not affect the Oulanka region too drastically, because no large battles were fought there. The locals, however, lived in constant fear of Soviet Partisan attacks. There were several of these attacks and the memorial plaque in Hautajärvi Village is a reminder of one of them. By the trail that leads to Kiutaköngäs there is a part of a wartime fortification, which has been restored. Traffic on the River Oulanka has been observed from the shooting hole in this trench.

Along with the rugged geography and the varied microclimates, the location of the park is also one of the main reasons for the great variety of plants and trees, with more than 500 vascular plant species in the area. There is an overlap between northern and southern species in terms of their distribution, and numerous species in the east of Finland have their westernmost outposts here. Oulanka has a nutrient-rich soil, which makes it ideal for the rare and demanding flora that is found here. The Oulanka River Valley was a very important dispersal route for various species coming from eastern Finland, after the last Ice Age. In late summer, the park abounds with bilberries and mushrooms, and wild orchids are one of the most popular flowers in the area.

The history of Oulanka National Park is filled with northeastern Finnish cultural features. The encounter between Finnish farmers and the Sami people has left its mark in the local names, for example. In the Sami language, ‘kiutaköngäs’ means ‘large rapids in a deep gully’. ‘Oulanka’ comes from the Finnish word ‘oula’ or ‘oulu’, meaning ‘floodwater’.

The flood meadows of Oulanka are an indication of the creativity of the local people in obtaining valuable natural hay for livestock. Another feature of the area’s history is the time of the ‘logging fever’, during which loggers floated down the Oulankajoki River while standing on logs.

From 2002, Oulanka was the first of the two Finnish national parks which became part of the World Wide Fund for Nature’s PAN Parks, the other one being the Southwestern Archipelago National Park. 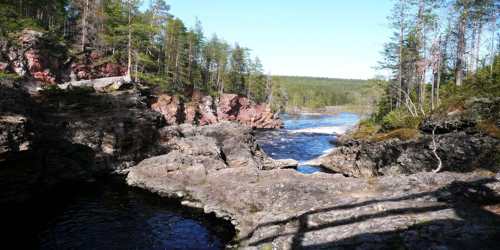 To get to the sights of Oulanka visitors must often walk a few kilometers. The most famous sight, the Kiutaköngäs Falls, is easy to reach by foot: it is only about 1 km from the next parking area. 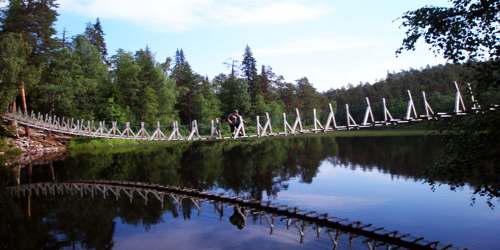 Two magnificent orchids can be found here near the Arctic Circle. The lady’s slipper grows in the marshlands, and the calypso serves as the symbol of the park itself. Calypso is in bloom from the end of May to mid-June. The park’s reindeer population is semi-domesticated; look for their identifying ear tags. Local herders have grazing rights in the park, and their animals wander freely, browsing on greens, lichens, and mushrooms during the warmer months. The animals are herded up in fall and spend the winter in corrals.

Oulanka is one of the most popular national parks in Finland. The most well-known Finnish trekking route, Karhunkierros (80 km), is located in the national park and is accessible all year round. Other routes include the Pieni Karhunkierros Trail (12 km), Keroharju Hiking Trail (17 km), and other smaller nature trails such as the Rytisuo Nature Trail (5 km), Hiidenlampi Nature Trail (5 km), and the Kiutaköngäs Day-trip Trail (8 km). There are various camping areas, designated fireplaces, wooden cabins, and boats which are available to the public. There are also some winter trails, which include the Rytisuo Snowshoeing Trail (7.5 km) or the Oulanka Wilderness Trail, from Juuma to Kiutaköngäs (26 km) which can be also explored with skis, snowshoes or even snowmobiles. Other activities include canoeing or cycling through some routes. Visitors are allowed to pick berries and mushrooms but are not allowed to hunt game or fish without a license.

Oulanka is a nature photographer’s paradise, and the Rivers Oulankajoki and Kitkajoki running through the park offer splendid opportunities for canoeing, paddle boarding, and whitewater rafting. The River Oulankajoki is also a joining link to the equally impressive Paanajärvi National Park on the Russian side of the border.