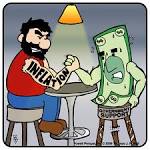 Economists wake up in the morning hoping for a chance to debate the causes of inflation. There is no one cause that’s universally agreed upon, but at least two theories are generally accepted:

Demand-Pull Inflation – This theory can be summarized as “too much money chasing too few goods”. In other words, if demand is growing faster than supply, prices will increase. This usually occurs in growing economies.

Cost-Push Inflation – When companies’ costs go up, they need to increase prices to maintain their profit margins. Increased costs can include things such as wages, taxes, or increased costs of imports.

Costs of Inflation
Almost everyone thinks inflation is evil, but it isn’t necessarily so. Inflation affects different people in different ways. It also depends on whether inflation is anticipated or unanticipated. If the inflation rate corresponds to what the majority of people are expecting (anticipated inflation), then we can compensate and the cost isn’t high. For example, banks can vary their interest rates and workers can negotiate contracts that include automatic wage hikes as the price level goes up.

Problems arise when there is unanticipated inflation: