Biotechnology in its simplest connotations may be defined as a technology based on biological systems – plants, animals and microbes or parts of it (cell, tissue, gene or DNA) to derive the best goods and services for the benefit of human being. Although the practice of biotechnology principles is very old, as in the case of fermentation processes like making of alcohol, yogurt, preparation of cheese, bread etc, the term ‘biotechnology’ itself got its due place after the principles of recombinant DNA technology or genetic engineering came into picture. And now when we talk of biotechnology we usually mean the technology derived primarily through the use of ‘recombinant DNA’.

Bangladesh, as becoming an industrial country largely depends on the performance of its industrial sector. The growth of conventional biotechnology in industry has reasonably developed the need of facing challenges of modern biotechnology in Bangladesh. However, modern biotechnology as a specialized sector in industry is promising but not very old in Bangladesh. Therefore, it needs considerable concentration from large talent pools of multiple scientific disciplines such as molecular and cell biology, chemistry, physics, engineering, bioinformatics, medicine, agriculture, microbiology, technology transfer & commercialization, bioentreprise & biofinancing and intellectual property rights management.

Biotechnology offers opportunities to convert our biological resources into economic wealth and employment opportunities. Innovative biotech products and services development will help us to gain a more bio-based economy. The last part of the 20th century witnessed spectacular progress in the field of Biotechnology. Such advances have had a beneficial impact of industrial biotechnlogy. Bangladesh will also explore the opportunities of the new centuries in the area of science and industrial biotechnology.

Increasing importance of biotechnology in the face of frequent natural calamities:

Bangladesh and many parts of the world experience periodically natural disasters such as cyclones, drought and flood which bring in their wake near famine conditions and epidemics claiming countless lives. Ever mounting carbon dioxide emissions are contributing to global warming, threatening our existence from the planet. All these contingencies have increased the world demand for flood-, drought tolerant and disease and pest resistant crops. The application of multitude of techniques offered by biotechnology may pave the way toward its satisfactory solution.

Industrial biotechnology is that set of technologies which come from adapting and modifying the biological organism, processes, products, and systems found in nature for the purpose of producing goods and services.

It is a bio-based process of advancing sustainable, cost and eco-efficient production of chemicals, materials, consumer goods, and alternative energy. This is a new and exciting approach to preventing pollution, resource conservation and reducing costs. If biotechnology is able to be developed to its full potential then industrial biotechnology will have a larger impact on the country than health and agricultural biotechnology combined. The following are the areas where we can specifically use industrial biotechnology to:

In the field of industrial biotechnology Bangladesh is yet to make real breakthroughs. Modern biotechnological programmes involving gene transfer technology have yet to be started in real earnestness. Whatever has been possible is through classical/old biotechnology methods. However, the results are quite encouraging and a good number of projects are in advanced stage which can be taken up for commercialization. Some of these research programmes are:

Following are some Products of industrial biotechnology and services 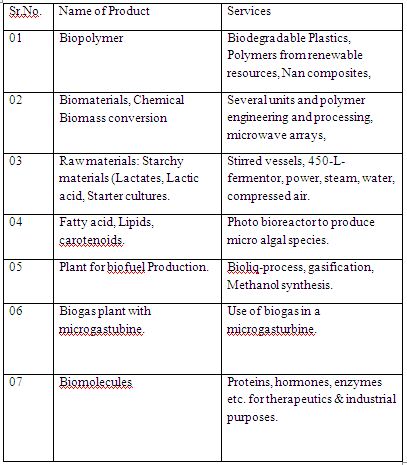 A significant achievement has been made in the field of ‘BIOGAS’ production from animal excreta (cowdung) and agricultural residues. The Institute of Fuel Research and Development (IFRD) has been working since long in this field. As a result of research findings and its subsequent development in collaboration with Department of Energy (DOE), at present more than 10,000 biogas plants have been installed in rural areas. An extended programme to set up about 100,000 biogas plants throughout the country has also been taken up by the government which is now under implementation. In case of environmental biotechnology Bangladesh is yet to start its programme by utilizing modern biotechnological techniques. Whatever has been possible is through conventional methods. But, because of excessive population pressure and overall industrial activity, environmental pollution is gradually increasing day by day and is causing a real threat to human health and ecological balance. Industrial effluents, municipal garbage and sewerage are discharged with minimum or no treatment at all into the surface water, causing water pollution. The Department of Environment (DOE) of the Government of Bangladesh is doing some routine work only. Among the limited activities Bangladesh Atomic Energy Commission (BAEC) has installed advanced facilities to analyze harmful agrochemical residues at a very low concentration. Microbial technology could be a useful tool to minimize the solid waste and effluents causing pollution. What is needed is a broadbased ‘bioremediation’ programme involving modern biotechnological approach including the development of microbes capable of degrading Xenobiotics and recalcitrant pollutants.

‘Bioethics’ refers to the ethical or moral obligations/rules of behaviour/professional standard of conduct dealing with biological research. Although literally the term ‘Bioethics’ refers to all biological research activities, actually the term has practically been evolved after the advent of biotechnological research activities. In response to ‘Bioethics’ Bangladesh recently is going to support the International Convention against human cloning for reproduction to be placed on the agenda of 56th UN General Assembly. Bangladesh strongly feels that human reproduction cloning is against the human dignity and in the long run it may also cause havoc to mankind. Bangladesh, though belated in the field of biotechnology, for bio- ethical issues it is quite conscious. Biotechnology, specially the work on genetic engineering, is at present at a very nascent stage. But, before embarking on a broad-based research programme, Bangladesh government has given thoughts for enacting ‘biosafety guidelines’ and through an expert committee and a national seminar the national ‘biosafety guidelines’ have been framed to be followed by the scientists working in the area of Biotechnology. Bangladesh signed the Cartagena Protocol on 24 May, 2000. ‘The Bangladesh Biosafety Act-2001’ has been approved by parlament in 2006. The main objective is to provide the basis of establishing a regulatory regime to ensure safe transfer, handling, transit, transboundary movement, development, field trial and commercial release of Genetically Modified Organisms.

A web-based Forum called, “GNOBB” was created in 2004. Its primary objective was to establish a global network of Bangladeshi Biotechnologists (BB) for the purpose of networking and utilizing the expertise of BB both from home and abroad in promoting biotechnology in BD. Within a short span of time, the membership rose from a mere 30 to almost 300 – a three fold increase indicating how keen and enthusiastic are BB from both local and non-resident Bangladeshis (NRB) to make substantial contribution toward bringing Bangladesh in the world map of biotechnology. The website provides a search engine which may be used to retrieve valuable information regarding member scientists individually, their field of specialization, achievements and important publications.

At the suggestion of some GNOBB members an international conference was organized in April last year (2007) with the main focus on preparing a draft suggesting improvement of the national policy document on Biotechnology, announced in 2006 by the Government of Bangladesh. The draft recommended among others, creation of the National Council of Biotechnology (NCBT) with an autonomous status including freedom to spend within the approved budgetary provision. We hope that during the tenure of the present regime, the recommendations will be approved by GoB giving a new lease of life to this emerging science of the 21st century.
GNOBB has been able to bring together many outstanding NRB biotechnologists who have extended their help to promote biotechnology in BD. They are: Dr. Abed Chaudhury, Dr. Zaheed Husain, Professor Ahmed Azad, Dr. Parvez Haris, Dr. Abul Ekramoddoullah, Dr. Abul Hussam. Latest to join with offer of help is Professor Maqsudul Alam. In the current conference three of the above distinguished scientists, namely, Dr. Abed Chaudhury, Dr. Zaheed Husain, Professor Ahmed Azad are presenting papers to enrich its deliberations.