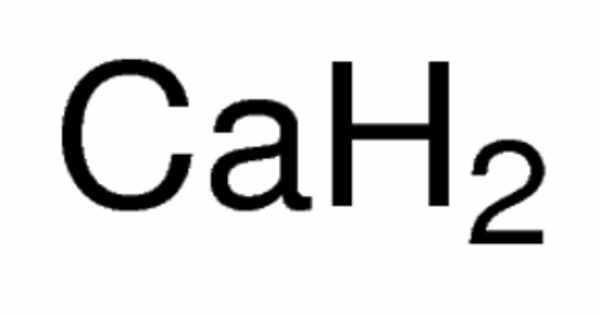 Calcium hydride, also known as alkaline earth hydride, is a chemical compound with the formula CaH2. This grey powder (white if pure, which is uncommon) reacts violently with water, releasing hydrogen gas. CaH2 is thus used as a drying agent, also known as a desiccant.

CaH2 is a saline hydride, which means it has a salt-like structure. Saline hydrides are formed by alkali metals and alkaline earth metals heavier than beryllium. Sodium hydride, which crystallizes in the NaCl motif, is a well-known example. These species are insoluble in any solvent that they do not react with. CaH2 crystallizes as PbCl2 (cotunnite) in the PbCl2 structure.

Calcium hydride is a salt-like compound that is white and crystalline when pure but is typically obtained in gray to gray-brown lumps and is primarily used as a reducing agent in the preparation of powdered metals, a portable source of hydrogen, and a drying agent.

Calcium hydride is made from its elements by combining calcium and hydrogen at temperatures ranging from 300 to 400 °C.

A two-step reduction process is used to create calcium hydride. First, CaO is vacuum distilled from a heated mixture of CaO and Ta powder to produce calcium metal. The calcium metal is then transferred to a second system where it is heated in the presence of hydrogen gas to form CaH.

Another way to prepare Calcium Hydride is to heat calcium chloride along with hydrogen and sodium metal. The reaction happens in the following way:

Calcium Hydride can also be synthesized by reducing calcium oxide (CaO) with magnesium (Mg). In the presence of hydrogen, the reaction is carried out. This reaction also results in the formation of magnesium oxide. The formula for this chemical reaction is as follows:

Calcium hydride is an effective drying agent for aprotic base-stable solvents such as ethers and tertiary amines. It is a useful dehydrating agent in the high yield and purity synthesis of aldehyde enamines. This chemical compound is an effective desiccant for a wide range of basic solvents, including amines and pyridine. It is sometimes used to pre-dry solvents prior to the use of more reactive desiccants.

It can cause severe irritation in case of direct contact with the eyes and skin. Accidental inhalation and ingestion may also cause hazardous effects on human health.