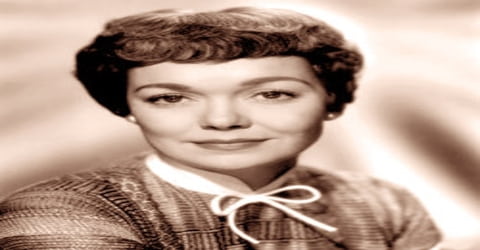 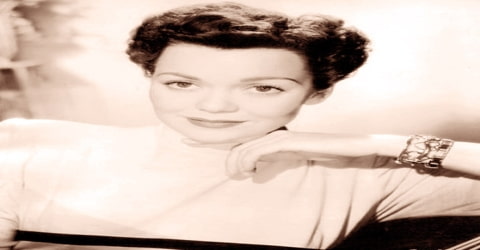 Wyman had a long distinguished career in Hollywood that spanned almost seven decades. She started her career as a singer on the radio with the name Jane Durrell. Then she started appearing in small roles in films where she called herself Sarah Jane Fulks. After that, she signed a contract with ‘Warner Brothers’ and acted in both ‘A’ and ‘B’ grade movies under the name Jane Wyman. She won four Oscar nominations for the ‘Best Actress’. She had a bitter childhood and her mother had to look after her ailing father. Her father died when she was four-year-old and she had to accompany her mother to Los Angeles in search of a job. Sarah tried to get a job in the studios there but nobody gave any wok to the snub-nosed girl and she had to return to St. Joseph. She was ultimately adopted by the Fulks couple and got a home where she could live in peace. According to an interview, she survived four different cycles in pictures which were ‘the brassy blonde’, ‘the musicals’, ‘the high dramas’ and then the ‘inauguration of television’ and was able to survive the town which was notorious for exploiting talent and discarding it.

A popular contract player, she frequently played the leading lady, her roles including starring alongside William Hopper in Public Wedding (1937), Ronald Reagan and Eddie Albert in Brother Rat (1938) and its sequel Brother Rat and a Baby (1940), Dennis Morgan in Bad Men of Missouri (1941), Marlene Dietrich in Stage Fright (1950), and Sterling Hayden in So Big (1953). She was also featured opposite Rock Hudson in Magnificent Obsession (1954) and All That Heaven Allows (1955), both directed by Douglas Sirk. She received an Academy Award for Best Actress for her performance in Johnny Belinda (1948) and was a three-time winner of a Golden Globe. She achieved continuing success in the television soap opera Falcon Crest (1981–1990), in which Wyman played the lead role of villainous matriarch Angela Channing. 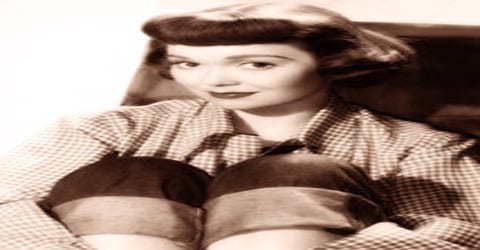 Jane Wyman, by name of Sarah Jane Mayfield; Sarah Jane Fulks, was born in St. Joseph, Missouri, on January 5, 1917. Her father was Manning Jefferies Mayfield and her mother was Gladys Hope Christian, a doctor’s stenographer, and office assistant. Wyman was the only child of this union and had no biological siblings, despite some erroneous bios saying she was the youngest of three siblings. This may be in reference to her foster parents’ children.

Wyman’s biological parents were married in March 1916 in Jackson County, Missouri, and Wyman was born in January 1917. Her parents divorced in 1921 and her father died the next year after which her mother moved to Cleveland, Ohio, in search of work. Her unsettled family life resulted in few pleasurable memories. Wyman later said, “I was raised with such strict discipline that it was years before I could reason myself out of the bitterness I brought from my childhood.” In 1928, aged 11, she moved to southern California with her foster mother.

Jane Wyman attended the ‘Lafayette High School’ in St. Joseph, Missouri but dropped out in 1932 when she was only 15. She began a radio singing career, calling herself “Jane Durrell” and adding years to her birthdate to work legally, as she would have been under-aged. 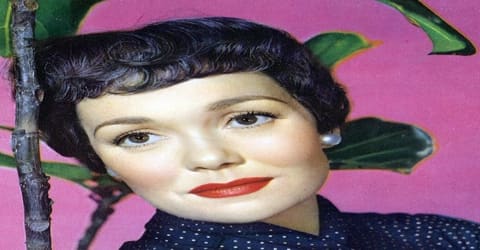 Jane Wyman married five times and had four husbands. She married salesman Ernest Eugene Wyman in Los Angeles, California, on April 8, 1933. Wyman recorded her name as ‘Jane Fulks’ on the wedding certificate. She also listed foster parents Emma and Richard Fulks as her parents. In keeping with the tendency of making herself older than she really was, she gave her age as 19 on the document. Truthfully, she had turned 16 just 3 months prior. The couple would divorce after 2 years. Wyman kept her first husband’s surname professionally for the remainder of her life.

Wyman married Myron Futterman, a wealthy children’s clothing manufacturer, on June 29, 1937, in New Orleans, and divorced him on November 1, 1938.

Wyman, who had converted to Catholicism in 1953, never remarried. She was a member of the Good Shepherd Parish and the Catholic Motion Picture Guild in Beverly Hills, California. 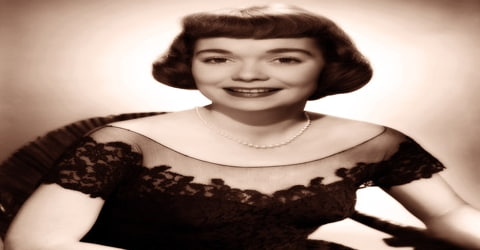 After dropping out of Lafayette in 1932 at age 15, Jane Wyman returned to Hollywood, taking on odd jobs as a manicurist and a switchboard operator, before obtaining small parts in such films as The Kid from Spain (as a “Goldwyn Girl”; 1932), My Man Godfrey (1936), and Cain and Mabel (1936). She signed a contract with Warner Brothers in 1936. By the time she starred in Public Wedding in 1937, she was already divorced from first husband Ernest Wyman. However, she would retain use of his surname for the remainder of her career.

Wyman signed a contract with ‘Warner Bros’ in 1936. She acted in ‘Gold Diggers’ in 1937 and starred in ‘Public Wedding’ in 1937 opposite William Hopper. During this period she changed her name from Durrell to Wyman. She appeared in the film ‘Brother Rat’ in 1938 and its sequel ‘Brother Rat and a Baby’ in 1940 opposite Ronald Reagan whom she married later.

In 1941, Wyman appeared in ‘You’re in the Army Now’, in which she and Regis Toomey had the longest screen kiss in cinema history: 3 minutes and 5 seconds.

Wyman was a singer on the radio, appeared in the choruses of movie musicals and in bit parts, and starred in a number of B movies before her portrayal of an alcoholic’s girlfriend in The Lost Weekend (1945) proved to be her breakthrough as a dramatic actress. After starring in The Yearling (1946), for which she received her first Academy Award nomination, Wyman won the best actress Oscar for her portrayal of a deaf rape victim in Johnny Belinda (1948); she also won Oscar nominations for her roles in The Blue Veil (1951) and Magnificent Obsession (1954). 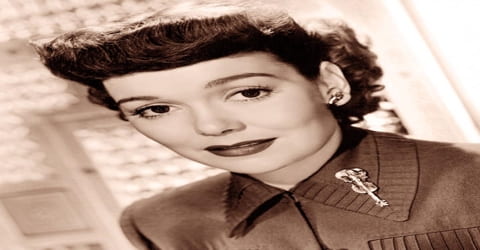 Her first guest-starring television role was on a 1955 episode of General Electric Theater, a show hosted by her former husband Ronald Reagan. This appearance led to roles on Summer Playhouse, Lux Playhouse, Westinghouse Desilu Playhouse, Checkmate, The Investigators, and Wagon Train. She guest-starred in 1959 on The Ford Show, Starring Tennessee Ernie Ford on NBC. She was the hostess of The Bell Telephone Hour and Bob Hope Presents The Chrysler Theatre. She had telling roles in both The Sixth Sense and Insight, among other programs. She hosted an anthology television series, Jane Wyman Presents the Fireside Theater, for which she was nominated for an Emmy Award in 1957.

During the period 1955-1958 Jane moved to the television and hosted, co-produced and starred in the shows ‘Jane Wyman Presents Fireside Theater’ and ‘Jane Wyman Theater’. Her last feature film was ‘How to Commit Marriage’ in 1969 opposite Bob Hope and Jackie Gleason. 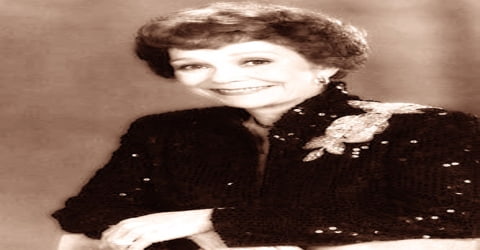 In the spring of 1981 (a few months after her ex-husband became the president), Wyman’s career enjoyed a resurgence when she was cast as the scheming Californian vintner and matriarch Angela Channing in The Vintage Years, which was retooled as the primetime soap opera, Falcon Crest. The series, which ran from December 1981 to May 1990, was created by Earl Hamner, who had created The Waltons a decade earlier. Also starring on the show was an already established character actress, Susan Sullivan, as Angela’s niece-in-law, Maggie Gioberti, and the relatively unknown actor Lorenzo Lamas as Angela’s irresponsible grandson, Lance Cumson. The on- and off-screen chemistry between Wyman and Lamas helped fuel the series’ success. In its first season, Falcon Crest was a rating hit, behind other 1980s prime-time soap operas, such as Dallas and Knots Landing, but initially ahead of rival Dynasty. Cesar Romero appeared from 1985 to 1987 on Falcon Crest as the romantic interest of Angela Channing. 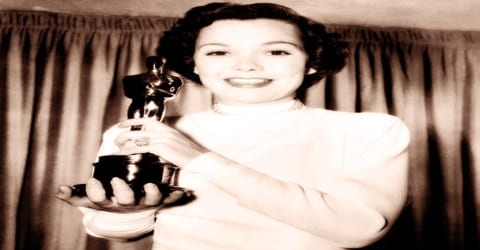 Jane Wyman was nominated for ‘Academy Award for Best Actress Award’ in 1947 for ‘The Yearling’. In 1949 she won the ‘Oscar for the Best Actress’ and the Golden Globe for Best Motion Picture Actress’ for ‘Johnny Belinda’.

In 1955 Wyman won a nomination for the ‘Oscar for Best Actress’ for ‘Magnificent Obsession’ made in 1954. In 1957 she was nominated for the ‘Emmy for Best Continuing Performance by an Actress in a Dramatic Series’ for ‘Jane Wyman Presents The Fireside Theater’.

Jane Wyman died on September 10, 2007, at her home in Rancho Mirage, Palm Springs, California at the age of 90 due to diabetes and arthritis complications. Wyman reportedly died in her sleep of natural causes. A member of the Dominican Order (as a lay tertiary) of the Roman Catholic Church, she was buried in a nun’s habit. She was interred at Forest Lawn Mortuary and Memorial Park in Cathedral City, California.

Wyman was the only wife of an American President to have received an ‘Oscar for Best Actress’.