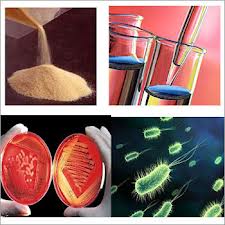 The role of suitable quality culture media for cultivation of microorganisms cannot be over emphasised. On it depends the very success of isolation of aetiological agents. Only in exceptional cases, can an organism be identified on the basis of its morphological characteristics alone.

Bacterial media can be classified into 3 classes

Medium which is used for the general cultivation of bacteria. Example: Nutrient broth, Nutrient agar, infusion broth and lysate media.

(b) Storage media
Medium in which bacteria are stored in “stock culture” condition for longer periods to provide a source of viable cultures are called storage medium. Example: Yeast extract mannitol agar medium.

(c) Enrichment media
Enriched medium (enrichment medium) is that in which nutritional environment is adjusted in such manner as to enhance selectively the growth of a certain bacterial type within a given mixed inoculum. This approach constitutes a powerful tool for the bacteriologist in the isolation and identification of pure cultures from an initially mixed population of bacteria.

Example: Addition of extracts of plant or animal tissues to Nutrient broth or Nutrient agar media provides additional nutrients and the media start favouring the growth of fastidious heterotrophic bacteria.

The observer may see a clear zone of hemolyzed red blood cells around certain colonies of bacteria while the non-hemolyzed bacterial colonies do not develop such a clear zone around them. Differential media have got some chemical constituents which characterize different bacteria by their special colonial appearances in the culture e.g. MacConkey agar contains lactose as a substrate and neutral red as an indicator. Bacteria fermenting lactose produce acid and this will change the colour of the indicator and thus the colonies will turn red. The red lactose fermenting colonies can be differentiated from the pale non-lactose fermenting colonies.

Certain media of prescribed composition have profound influence on the bacterial cells with respect to formation of enzymes, toxins, antibiotics and other products. Such media are called assay media or media for special purposes.

These media are different from growth media and are required to maintain the viability and physiological characteristics of bacteria.

Mix the ingredients and dissolve them by heating in a steamer. When cool, adjust the pH to 7.5-7.6.

To the ingredients as in nutrient broth, add 15 gm agar per litre. Dissolve the agar in nutrient broth and sterilize by autoclaving at 121oC for 15 minutes. Prepare plates and slopes as required.

Melt the sterile nutrient agar by steaming, cool to 45oC.

Immediately pour into petri dishes or test tubes and allow to set.