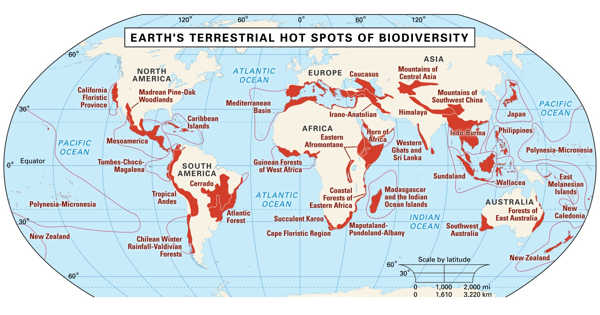 Biological invasions are a major contributor to biodiversity loss. They have the potential to reduce the diversity of ecological strategies – the ways in which species feed, live, function, and defend themselves – by up to 40% in birds and 11% in mammals.

The introduction of invasive species causes a decline in certain native species: a team of researchers from the CNRS and the University of Paris-Saclay has demonstrated that biological invasions threaten 11 percent of the global phylogenetic diversity of birds and mammals, or their accumulated evolutionary history. As a result of biological invasions, their ability to adapt to environmental changes may be greatly reduced. This study, published in Global Change Biology, sheds more light on the future of ecosystems and the extinction of certain species.

The introduction of species outside their natural distribution zone has increased as a result of globalization. The introduction of so-called invasive species (for example, the Asian hornet in France) causes a decline in certain local species: biological invasions are one of the most important global drivers of biodiversity loss, and the primary driver in island regions.

A team of researchers has managed to show that 11% of the global phylogenetic diversity of birds and mammals, in other words, their accumulated evolutionary history, is threatened by biological invasions.

Biological invasions are not the only cause of increased extinction rates among island species. Extinction rates are also higher on islands because, prior to human colonization, island species had small populations, limited genetic diversity, and narrow ranges, and because human alterations to land through use destroy an already-limited critical habitat. Plant and animal hitchhikers and fellow travelers who accompany humans to isolated islands, on the other hand, interact with these other extinction causes, and biological invaders endanger native species in reserves and other protected lands.

Until now, research on biological invasions has primarily focused on the number of species that are on the verge of extinction. The study, conducted by scientists from the CNRS1 and the University of Paris-Saclay, enables researchers to go even further by identifying and quantifying the profiles of endangered birds and mammal species.

The researchers discovered that biological invasions threaten 11% of the phylogenetic diversity of these two groups, i.e. their accumulated evolutionary history. The study also discovered that invasive species have an even greater impact on these groups’ ecological strategies, i.e. the means they have to feed, live, function, and defend themselves from other species. Biological invasions endanger 40% of the diversity of ecological strategies of birds and 14% of those of mammals.

This study confirms that birds are particularly vulnerable to invasions as a group. Indeed, many birds, particularly those from oceanic island regions, are less able to adapt their strategies to more generalist invasive species than their continental counterparts.

The rat, for example, is a major threat to the kagu, a symbol of New Caledonia and the only member of the Rhynochetidae family. This bird cannot fly and only feeds on the ground. As a result, it is unable to adapt to a new land predator, such as the rat. Other bird species, such as pollinators and seed dispersers, are threatened by biological invasions. The extinction of these species would thus have ramifications for the functioning of the ecosystems in which they play an active role.

Biodiversity loss includes both the global extinction of species and the local reduction or loss of species in a specific habitat, resulting in a loss of biological diversity. The latter phenomenon can be either temporary or permanent, depending on whether the environmental degradation that causes the loss is reversible via ecological restoration/ecological resilience or is effectively permanent (e.g. through land loss). Human activities that extend beyond the planetary boundaries as part of the Anthropocene are driving global extinction, which has so far been proven to be irreversible.

Even though permanent global species loss is a more dramatic and tragic phenomenon than regional changes in species composition, even minor changes from a healthy stable state can have a dramatic impact on the food web and food chain insofar as reductions in just one species can negatively affect the entire chain, leading to an overall reduction in biodiversity, possible alternative stable states Biodiversity loss usually offsets the ecological effects of biodiversity.

This research allows us to better predict future bird and mammal extinctions and the consequences for ecosystems. Inflammation in the Intestine is Linked to Gut Fungi in Crohn’s Disease Patients, According to a New Study