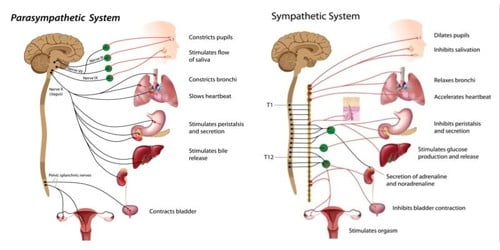 The autonomic nervous system (ANS) controls the conditions inside the body. It regulates certain body processes, such as blood pressure and the rate of breathing. It is sometimes called the ‘visceral nervous system’ or ‘involuntary nervous system’. This system works automatically (autonomously), without a person’s conscious effort. The ANS is part of the peripheral nervous system. It operates by receiving information from the environment and from other parts of the body.

ANS controls all automatic actions. That means that it controls all reflexes and actions during sleep. The autonomic nerve pathways connect different organs to the brain stem or spinal cord. Most of its activities are done without the person having conscious control over them. The person usually cannot feel what the ANS is doing. We are often unaware of the ANS because it functions involuntarily and reflexively. However, some of the ANS’s activities work together with the conscious mind, like breathing.

The autonomic nervous system is the part of the nervous system that supplies the internal organs, including the blood vessels, stomach, intestine, liver, kidneys, bladder, genitals, lungs, pupils, heart, and sweat, salivary, and digestive glands. The ANS controls many different things, like heart rate, digestion, respiration rate, salivation, perspiration, a diameter of the pupils, the discharge of urine, and erection. It regulates a variety of body process that takes place without conscious effort. 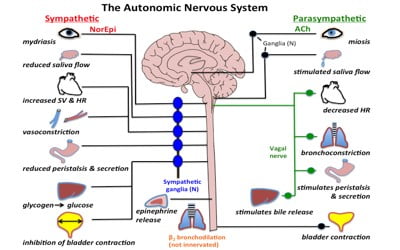 There are two different sections within the ANS: