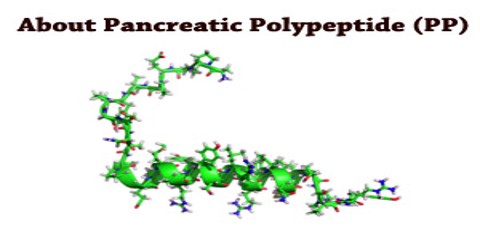 Pancreatic Polypeptide (PP) is a 36 amino acid peptide produced and secreted by PP cells (originally termed F cells) of the pancreas which are primarily located in the Islets of Langerhans.  It is part of a family of peptides that also includes Peptide YY (PYY) and Neuropeptide Y (NPY).  PP is rapidly released after a meal but remains elevated for 4-6 hours in humans with the Vagus nerve being the major stimulator.  PP has effects on GI motility, metabolism and food intake. Its secretion is stimulated by eating, exercising, and fasting. It can inhibit gallbladder contraction and pancreatic exocrine secretion, but its role in the metabolism of nutrients is uncertain. Its primary action on the exocrine pancreas is to inhibit secretion in vivo by acting on receptors in the brain leading to inhibition of vagal output to the pancreas.

The function of Pancreatic Polypeptide (or PP) is to self-regulate pancreatic secretion activities (endocrine and exocrine); it also has effects on hepatic glycogen levels and gastrointestinal secretions. Its secretion in humans is increased after a protein meal, fasting, exercise, and acute hypoglycemia and is decreased by somatostatin and intravenous glucose.

The augmentation of PP secretion has been observed in hormonal-active pancreatic tumors (insulin, glucagon), in Verner-Morrison syndrome, and in gastrinomas. The principal stimulus for Pancreatic Polypeptide (or PP) secretion is parasympathetic vagal cholinergic innervations. Vagotomy reaffirms this as ablation of the vagal nerves attenuates PP secretion. Administration of atropine, a competitive muscarinic acetylcholine antagonist, also eliminates PP response, demonstrating that release is governed by cholinergic mechanisms. PP is mainly released in response to food intake proportional to caloric consumption. Secretion is biphasic with a cephalic and gastrointestinal phase.

Pancreatic Polypeptide (PP) can be measured in plasma by RIA, shows a basal level of 10-30 pM and exhibits a rapid increase after food ingestion peaking at 15-30 min which is followed by a lower sustained phase that lasts 4-5 hours in humans.  Protein is the most potent stimulus followed by fat with glucose less effective.  Cephalic, gastric and intestinal components have been demonstrated with the intestinal the largest.  The vagal nerve is a major stimulator of PP secretion and this component can be blocked with atropine.  In addition to electrical stimulation of the vagus, sham feeding, 2-deoxyglucose, and insulin induced hypoglycemia all stimulated PP secretion in a vagal dependent manner.  The cephalic vagal phase is relatively short, lasting about 45 minutes.  Both intragastric and intraintestinal infusion of nutrients stimulates PP secretion and this is also partly mediated by the vagus.  Gastrointestinal hormones, especially CCK and gastrin, appear to take part in stimulating PP secretion.  Other GI hormones such as GIP, VIP and somatostatin may affect PP secretion.  Studies evaluating intraislet regulation of PP by insulin or glucagon have been inconclusive although somatostin inhibits PP release in vivo and in the perfused pancreas. Ghrelin and obestatin are reported to inhibit PP release from islets in vitro. The half-life of PP in plasma is about 6 min with PP being degraded by most capillary beds.  Renal disease is associated with a prolonged half-life in humans. The reported biologic actions of Pancreatic Polypeptide (PP) have primarily involved the GI tract although the physiological importance is often not clear.  In addition to acting on pancreatic secretion as detailed below, exogenous PP has been shown to affect gastric and biliary secretion and motility of the GI tract.  Pancreatic Polypeptide (PP) has been shown to either inhibit or stimulate gastric acid secretion in dogs depending on conditions.  In contrast, in a study in humans, infusion of PP to reproduce postprandial levels had no effect on gastric acid or pepsinogen secretion.  Although early reports indicated PP inhibited hepatic bile production, latter studies showed this was due to relaxation of the gallbladder.  No effect of PP was seen on intestinal secretion or absorption.  Reported effects of PP on GI motility include increasing LES pressure and enhancing gastric emptying in the rat but not humans, inhibiting gastric pacemaker activity and reducing gall bladder pressure. Metabolic effects of Pancreatic Polypeptide (PP) are modest in rodents including suppression of insulin and somatostatin secretion.  In birds, APP plays more of a role in metabolism and has been reported to deplete liver glycogen stores.

The actions of Pancreatic Polypeptide (PP) are mediated by specific receptors.  Initially through ligand binding studies and later by molecular cloning, a family of about five receptors were identified that bind NPY, PYY and PP all of which share a common structure, the “PP-fold”.  The various receptors are denoted by a capital Y with a numerical subscript.  Y1 and Y2 are the primary NPY and PYY receptors.