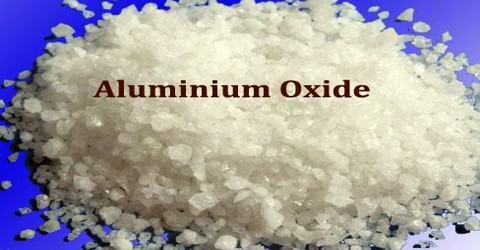 Aluminium oxide is a white or colourless insoluble powder occurring naturally as corundum and used in the production of aluminium and its compounds, abrasives, glass, and ceramics. It is an oxide of aluminum, occurring in nature as various minerals such as bauxite, corundum, etc. It is used as an adsorbent, desiccating agent, and catalyst, and in the manufacture of dental cements and refractories. It is commonly called alumina, and may also be called aloxide, aloxite, or alundum depending on particular forms or applications. It occurs naturally as the mineral corundum and, with minor traces of chromium and cobalt, as the minerals ruby and sapphire, respectively. In its hydrated form it also occurs as the rock bauxite, also called aluminum oxide. Chemical formula: Al2O3.

Corundum is the most common naturally occurring crystalline form of aluminium oxide. Rubies and sapphires are gem-quality forms of corundum, which owe their characteristic colors to trace impurities. Rubies are given their characteristic deep red color and their laser qualities by traces of chromium. Sapphires come in different colors given by various other impurities, such as iron and titanium.

Structure and Functions of Aluminum Oxide

Aluminium oxide also exists in other phases, including the cubic γ and η phases, the monoclinic θ phase, the hexagonal χ phase, the orthorhombic κ phase and the δ phase that can be tetragonal or orthorhombic. Each has a unique crystal structure and properties. Cubic γ-Al2O3 has important technical applications. The so-called β-Al2O3 proved to be NaAl11O17. The bond between the aluminum and the oxide is an ionic bond.  The structure of aluminum oxide is sometimes hexagonal.

It is used as an abrasive and thickening agent, but also functions as an anti-caking agent and absorbent. It can be found in cosmetic products like blush, powder foundation, lipstick and facial cleanser. It also acts as an insoluble carrier for mineral pigment, and is frequently mixed into mineral powder makeup. Because of its abrasive texture, many use these crystals to exfoliate and resurface the skin-particularly with Microdermabrasion.

Aluminum oxide conducts electricity easily. It also resists reacting with acids and bases at high temperature. It is a good thermal conductor due to its high boiling point. It is also among the hardest compounds in existence, which makes possible its use as an abrasive material. Metallic aluminium is very reactive with atmospheric oxygen, and a thin passivation layer of aluminium oxide (4 nm thickness) forms on any exposed aluminium surface. This layer protects the metal from further oxidation. The thickness and properties of this oxide layer can be enhanced using a process called anodising.

Aluminium oxide is an amphoteric substance, meaning it can react with both acids and bases, such as hydrofluoric acid and sodium hydroxide, acting as an acid with a base and a base with an acid, neutralising the other and producing a salt. Aluminum oxide is used in the ceramic industry as an insulating material. The porous ceramics formed from its use have good resistance toward most acids except phosphoric and hydrofluoric acid. These ceramics are preferred for their inertness and the fact that they can be used and reused in many process applications. It is used to the manufacture of refractories because of its low reactivity with acids and its high boiling point. Refractories must resist heat, pressure and acidic environments.

In the electronic industry, it is used in making passive components for interconnection and in the making of resistors and capacitors.It is also is used in the coating of titanium oxide, a compound that is used as a pigment for paints and plastic papers. It helps in preventing catalytic reactions between these products and the atmosphere. Aluminum oxide is also used in the making of fillers used in the welding industry.