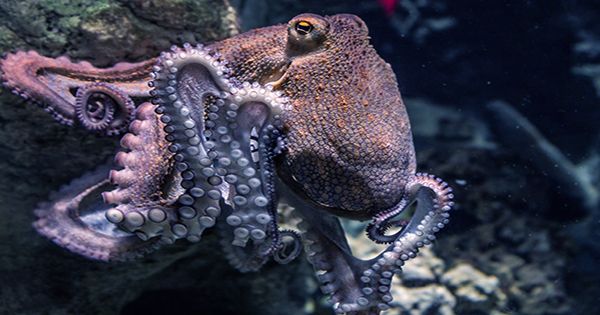 From their slightly scary escape abilities to popular documentaries, octopuses’ intellect has become famous. These feats of brilliance are likely to have led to their subsequent legal recognition as sentient creatures with rights in the United Kingdom.

However, MRI scans of the brains of four different octopus species reveal significant differences in the size and texture of their brains that are related to their lifestyles, indicating that only a few of them have this well-known problem-solving ability.

The University of Queensland’s Brain Institute has MRI equipment that is significantly more powerful than those used in hospitals, and hence capable of far finer resolution.

Dr. Wen-Sung Chung tested the gadget on three species of octopus and certain vampire squids, comparing the findings to those obtained on other species using techniques that are more traditional. The findings published in Current Biology.

Vampire squids, which thought to be a cross between squid and octopuses, are difficult to catch, according to Chung, especially if you want to examine their brains. Chung and co-authors were able to do so using specially built fishing nets, indicating that these critters had smooth brains similar to those of less intelligent mammals, which is appropriate for a slow-moving existence in a very basic environment.

The difficulties of recognizing food at extreme depths, on the other hand, have driven vampire squid to grow not just very huge eyes, but also enormous optic bulbs in their brains, according to Chung. “We don’t know what’s going on inside their heads,” Chung explained, “but visual input is critical.”

Octopuses that live in the complex ecosystems of shallow-water coral reefs have had to learn to adapt to rapidly changing circumstances and predict the actions of others; this is reflected in brains that are not only bigger than their deepwater counterparts in terms of size are but also folded like humans and other primates.

Even while overall neuron counts are similar to those of tree shrews, the larger surface area allows for complicated information processing, with shorter distances across folds allowing for quicker processing.

Despite their image as loners, reef octopuses may work together with other species when the situation calls for it. In a release, Chung added, “These octopuses show some amazingly complicated behaviors not known in other octopuses.” This involves teaming up with coral trout to go fishing.

Chung told IFLScience that the trout might occasionally locate prey that they cannot reach and will alert the octopus, whose tentacles would reach between rocks or hard corals to flush out microscopic animals that the two can share. It is the sea version of wolf-human collaboration.

The octopus must be able to read the messages that the trout sends in order for this to operate. Such behavior has observed from the Red Sea to the Great Barrier Reef, according to Chung, though it has seldom captured on film. Given that the octopus brain is “formed like a doughnut,” as Chung puts, it is not unexpected that their structure is fundamentally different from that of humans, the authors expect that their research will lead to a better understanding of the similarities and contrasts between the most intellectual vertebrate and invertebrate counterparts.