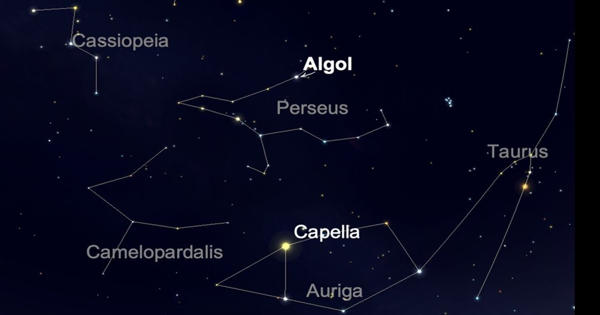 Algol – a bright star in the Perseus constellation

Algol is bright multiple star located in Perseus. It is also known as the Demon Star, is a bright star in the Perseus constellation. It is bright multiple stars in the constellation of Perseus and one of the first non-nova variable stars to be discovered. It is one of the best-known double stars that can only be seen in spectroscopes, the first star of its type discovered, and one of the first variable stars to be discovered before it explodes. The star Algol takes its name from an Arabic word meaning “the Demon’s Head.” This star is said to depict the terrifying snaky head of the Medusa monster. It lies at an approximate distance of 90 light-years from Earth and has an apparent magnitude that varies between 2.12 and 3.4.

Algol is made of three stars (Beta Persei A, B, and C) and the brightest is Persei A. It is a three-star system, consisting of Beta Persei Aa1, Aa2, and Ab – in which the hot luminous primary β Persei Aa1 and the larger, but cooler and fainter, β Persei Aa2 regularly pass in front of each other, causing eclipses. These stars partly eclipse each other every 2 days, 20 hours, and 49 minutes for 10 hours. Thus Algol’s magnitude is usually near-constant at 2.1 but regularly dips to 3.4 every 2.86 days during the roughly 10-hour-long partial eclipses. In the secondary eclipse when the brighter primary star occults the fainter secondary is very shallow and can only be detected photoelectrically.

Algol is a known variable star, which waxes and wanes in brightness. It is the second brightest star in the constellation, after Mirfak, Alpha Persei. It is one of the best-known variable stars in the sky and a prototype for a class of eclipsing variable stars known as Algol variables. It is a multiple-star system with three confirmed and two suspected stellar components. This variable star is easy to observe with just the unaided eye. At its brightest, Algol shines about three times more brightly than at its faintest. Algol’s brightness is usually at magnitude 2.1, with 10-hour long eclipses occurring every 2 days, 20 hours, and 49 minutes, when the fainter Beta Persei Aa2 passes in front of Beta Persei Aa1 and the system’s magnitude drops to 3.4.

At maximum brilliance, Algol matches the brightness of the nearby second-magnitude star Almach. From the point of view of the Earth, Algol Aa1 and Algol Aa2 form an eclipsing binary because their orbital plane contains the line of sight to the Earth. At a minimum, Algol’s light output fades to that of the star Epsilon Persei. They are very close to each other (separated by only 0.06 astronomical units on average, or about 1/17 of the distance between the Earth and the Sun) and they revolve quite quickly. The eclipsing binary pair is separated by only 0.062 astronomical units (au) from each other, whereas the third star in the system (Algol Ab) is at an average distance of 2.69 au from the pair, and the mutual orbital period of the trio is 681 Earth days. As they orbit each other, the stars pass in front of each other, causing eclipses. The total mass of the system is about 5.8 solar masses, and the mass ratios of Aa1, Aa2, and Ab are about 4.5 to 1 to 2. Algol’s eclipses can be observed without a telescope. The star’s brightness can sometimes be seen falling and rising on the same night.