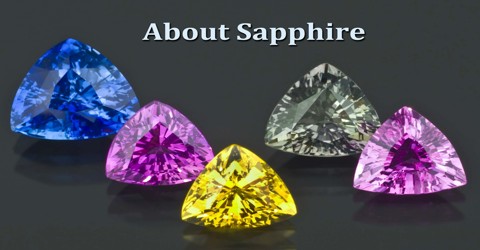 Sapphire is a clear, fairly pure form of the mineral corundum that is usually blue but may be any color except red. It often contains small amounts of oxides of cobalt, chromium, and titanium and is valued as a gem. The only color which sapphire cannot be is red – as red colored corundum is called ruby, another corundum variety. Pink colored corundum may be either classified as ruby or sapphire depending on locale. This variety in color is due to trace amounts of elements such as iron, titanium, chromium, copper, or magnesium. 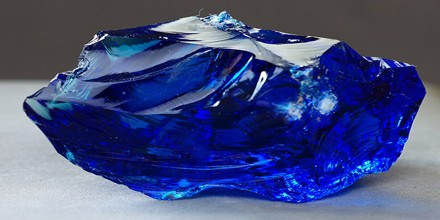 The most valuable color of Sapphire is a cornflower blue color, known as Kashmir Sapphire or Cornflower Blue Sapphire. An exotic type of sapphire, known as Color Changing Sapphire, displays a different color depending on its lighting. In natural light, Color Changing Sapphire is blue, but in artificial light, it is violet. Yellow and pink Sapphire have recently become very popular, and are now often seen in jewelry. Gray is the normal saturation modifier or mask found in blue sapphires. Gray reduces the saturation or brightness of the hue, and therefore has a distinctly negative effect. The color of fine blue sapphires may be described as a vivid medium dark violet to purplish blue where the primary blue hue is at least 85% and the secondary hue no more than 15%, without the least admixture of a green secondary hue or a gray mask. 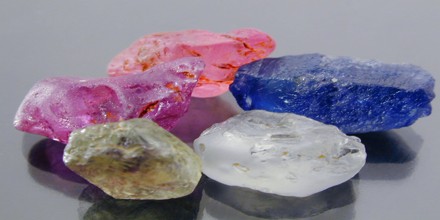 The color of sapphire may vary from blue, yellow, green, purple or orange, depending upon the trace impurities found in the nature.

Blue Sapphire Stone – Blue sapphire is the most beautiful variety in sapphire and comes in a variety of hues, varying from pale blue to vivid violet blue color. For a blue sapphire to be categorized as true blue, the secondary hue must not account for more than 15% of its color.

Yellow Sapphire Stone – Yellow sapphire, also known as Pukhraj is a gemstone related to Jupiter or Brihaspati and is worn to derive the benefits of this particular planet. The primary hue of the gemstone is yellow and its color ranges between greenish yellow to orange yellow, with a vibrant canary yellow being the most desirable color.

Pink Sapphire Stone – One of the most desirable colors in sapphire is pink. Pink sapphires occur naturally in different hues of pink, varying from pale pink color to a deep magenta color, which is attributed to the presence of trace impurities of chromium in the gemstones.

Padparadscha Sapphire – The rarest of the rare variety of sapphire is the Padparadscha sapphire, which occurs in tones of pink-orange, giving it a unique, alluring look. The stones are totally natural and are seldom subjected to treatment.

Star Sapphire – Another variety of sapphire is star sapphire, which exhibits a phenomenon called asterism, a star like look in the stone. It is caused by needle like inclusions present within the gem structure and these inclusions intersect each other, forming a six rayed star like pattern when seen under a light source.

Color Changing Sapphire – One of the rarest varieties among naturally occurring sapphires is that of color changing sapphires, which exhibit different colors when seen under different light sources. The phenomenon is caused by the absorption of different wavelengths by the stone, which is the result of the presence of trace impurities of vanadium and chromium. 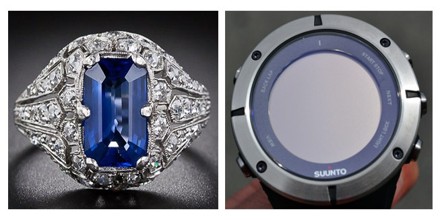 Sapphire is one of the most popular gemstones, and is used extensively in Jewelry, and to the most unusual and creative– beauty and fashion.

Jewelry – The most common of all uses is setting sapphires into precious metal jewelry, such as rings, earrings, necklaces etc. Gems designated for use in jewelry are usually categorized into standard shapes, sizes and colors according to most jewelers’ requirements.

Timepieces – Not only diamonds, many wrist watches carry sapphires, small ones or sometimes even a sapphire covering the watch itself.

Fashion Accessories – Not many know that sapphires are also set in fashion accessories, such as belts, buckles, hairpins, shoes etc. Every gem can be modified to match the client’s needs.

Beauty and Care – Like the fashion world, the beauty world has also recently discovered sapphires and turned them into a status symbol. Sapphires are often used in the beauty industry as nail decorations etc. These industries use tiny stones which are set simply and easily.