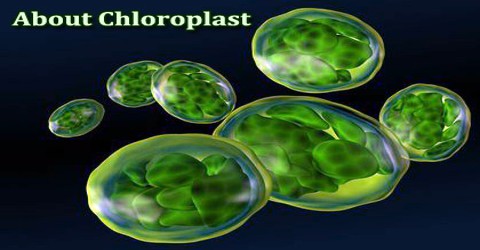 Chloroplast is an organelle unique to plant cells that contains chlorophyll, which is what makes plants green and is responsible for enabling photosynthesis to occur, so that plants can convert sunlight into chemical energy. It is a type of organelle known as a plastid, characterized by its high concentration of chlorophyll. Other plastid types, such as the leucoplast and the chromoplast, contain little chlorophyll and do not carry out photosynthesis. The first definitive description of a chloroplast was given by Hugo von Mohl in 1837 as discrete bodies within the green plant cell. In 1883, A. F. W. Schimper would name these bodies as “chloroplastids”. In 1884, Eduard Strasburger adopted the term “chloroplasts”.

Chloroplasts allow a plant to capture light energy from the sun and turn it into chemical energy. Chloroplasts accomplish this conversion because they contain chlorophyll, a bright green pigment that absorbs light energy and carries out a chain of chemical reactions. These chemical reactions result in the production of glucose, which the plant uses as food, either storing it or making cellulose to build its cell walls. Chlorophyll is stored in disk-shaped sacs or membranes called thylakoids. It is here that the light energy absorbed by the chlorophyll is directed and changed into chemical energy. This energy allows the plant to take in carbon dioxide, give off oxygen, and eventually produce the plant’s food.

Structure and Function of Chloroplasts The chloroplast genome typically is circular (though linear forms have also been observed) and is roughly 120–200 kilobases in length. The modern chloroplast genome, however, is much reduced in size: over the course of evolution, increasing numbers of chloroplast genes have been transferred to the genome in the cell nucleus. As a result, proteins encoded by nuclear DNA have become essential to chloroplast function. Hence, the outer membrane of the chloroplast, which is freely permeable to small molecules, also contains transmembrane channels for the import of larger molecules, including nuclear-encoded proteins. The inner membrane is more restrictive, with transport limited to certain proteins (e.g., nuclear-encoded proteins) that are targeted for passage through transmembrane channels. Role of Chloroplasts in Photosynthesis