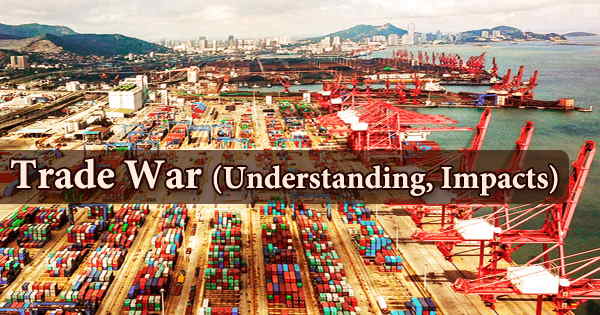 When one nation retaliates against another by raising import taxes or imposing other limitations on the latter’s imports, it is known as a trade war. It is an economic war that arises as a result of excessive protectionism, in which governments raise or impose tariffs or other trade barriers against one another in reaction to trade obstacles erected by the other. Tariffs, import quotas, domestic subsidies, currency devaluation, and embargos are just some of the ways these obstacles may be erected.

As each country erects a trade barrier, the other will respond with a policy of its own. As a result, the idea of “warring” emerges. Domestic trade unions or industry lobbyists might exert pressure on politicians to reduce the appeal of imported goods to consumers, resulting in a trade war. Customs wars, toll wars, or tariff wars are the names given to conflicts in which tariffs are the sole mechanism; as retaliation, the latter state may raise duties. Furthermore, trade conflicts are frequently the consequence of a misunderstanding of the many advantages of free trade.

When a country’s government feels that another country is participating in unfair commercial practices that are harming the first country’s markets, trade wars typically break out. As demonstrated by the Massacre of the Bandanese, which occurred following claimed violations of a new treaty, trade conflicts may evolve into full-fledged violence between governments. Trade war critics argue that they damage local businesses, consumers, and the economy in the long run. They may erect a trade barrier, such as a tariff on a major product imported from the other nation, in order to safeguard their own sector or generate employment.

This tit-for-tat fight may grow into a trade war if the other country retaliates. Trade conflicts are sometimes viewed as a byproduct of protectionism. Government acts and policies that impede international commerce are referred to as protectionism. The First Anglo-Dutch War, sparked by commercial disagreements, began with English attacks on Dutch merchant ships but quickly escalated to massive naval operations. During a period of strong European commercial competition, England attempted to end the Dutch dominance of the seas and trade routes in the Second Anglo-Dutch War for control of the seas and trade routes.

The Fourth Anglo-Dutch War erupted due to differences between the British and Dutch governments about the legality and conduct of Dutch commerce with Britain’s adversaries at the time. In general, a country will pursue protectionist measures to safeguard native firms and employment against foreign competition. Protectionism is also a strategy for reducing trade imbalances. Tariffs, import quotas, domestic subsidies, currency devaluation, and embargos are all examples of trade obstacles employed in trade wars. When a country’s imports outnumber its exports, it has a trade imbalance.

Trade restrictions can safeguard sectors in the near run. However, in the long run, they are typically detrimental to the economy as a whole. A tariff is a levy or fee levied on products entering a country. A trade war in a global economy may be highly destructive to both consumers and businesses, and the contagion can spread to impact many areas of both economies. After dissatisfaction against the shogunate’s open-door policy to foreign commerce, the Shimonoseki Campaign was launched.

Trade wars are waged by erecting trade barriers, which come in a variety of shapes and sizes. These barriers can be erected in a variety of methods, but the end result is usually the same. A trade war that starts in one industry might spread to other industries. Similarly, a trade war that starts between two countries might harm countries that aren’t originally engaged. The following are some of the common trade war tactics:

A trade war is distinct from other forms of import and export restriction, such as sanctions. Instead, because its aims are explicitly connected to commerce, the trade war has a negative impact on the trading relationship between two countries. The impact of trade wars on the economy may be divided into two categories: short-term and long-term. Imposing trade barriers will typically achieve the objective of safeguarding domestic firms in the near run.

Protectionist policies can be applied in addition to tariffs by capping import limits, establishing explicit product standards, or offering government subsidies for procedures to discourage outsourcing. In a trade war, on the other hand, the opposing nation will react by enacting its own protectionist policies. What typically occurs is that the rules put in place help the home firms being protected, while many other businesses suffer as a result of the foreign country imposing obstacles on other commodities.

Economists generally agree that trade conflicts damage the economy in the long run, impede GDP, and make a country less competitive in the global market. Trade conflicts can result in price hikes, with manufactured products in particular becoming more costly, causing inflation in the local economy. Even while domestic industries that are protected experience less competition, they do not produce at a lower cost than they did before the protectionist policy was implemented. This inefficiently increased product cost to consumers leads to reduced consumption and an overall economic downturn.

The German-Polish customs war, which raged between the Weimar Republic and Poland in the 1920s and 1930s, was an example of a modern tariff war. The Weimar Republic, commanded by Gustav Stresemann, intended to compel Poland to give up its territory by inducing an economic crisis by raising tolls on coal and steel produced there. As retaliation, the Poles raised toll charges on a variety of German goods. As a result, the port of Gdynia grew quickly, as it was the only route for Poland to export its commodities to Western Europe without passing through Germany.

Trade conflicts that last a long time, on the other hand, are typically regarded as bad. Higher prices and reduced consumption are the main reasons behind this. Trade conflicts may make sectors less competitive in addition to causing market inefficiencies. As a result of the diminished rivalry in both nations, industries are less likely to develop, causing production methods to stagnate.