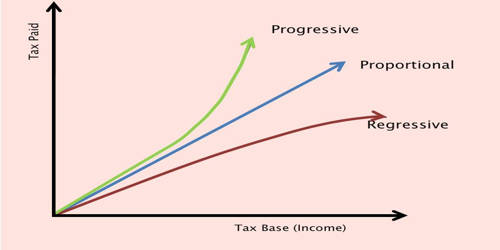 Proportional Tax is an income tax system that levies the same percentage tax to everyone regardless of income. It is a tax imposed so that the tax rate is fixed, with no change as the taxable base amount increases or decreases. It is the taxing mechanism in which the taxing authority charges the same rate of tax from each taxpayer, irrespective of income. It is the same for low, middle, and high-income taxpayers. The amount of the tax is in proportion to the amount subject to taxation.

“Proportional” describes a distribution effect on income or expenditure, referring to the way the rate remains consistent (does not progress from “low to high” or “high to low” like income or consumption changes), where the marginal tax rate is equal to the average tax rate. In a proportional tax system, all taxpayers are required to pay the same percentage of their income in taxes. They all pay the same tax rate, regardless of income. One example of a proportional tax today is the sales tax. Although sales tax may vary from one region to another, every buyer pays the same sales tax. For example, If the sales tax is 10 percent, every buyer of a laptop that is worth $1,000 would pay $100 in sales tax, regardless of personal income.

A proportional tax is one that imposes the same relative burden on all taxpayers—i.e., where tax liability and income grow in equal proportion. It is based on the theory that since everybody is equal, taxes should also be charged the same way. It can be applied to individual taxes or to a tax system as a whole; a year, multi-year, or a lifetime. Proportional taxes maintain equal tax incidence regardless of the ability-to-pay and do not shift the incidence disproportionately to those with a higher or lower economic well-being. It has more of a financial impact on higher-income individuals and businesses than on low-income earners.

A proportional tax is also frequently referred to as a “flat tax.” Flat taxes are defined as levying a fixed (“flat”) fraction of taxable income. They usually exempt from taxation household income below a statutorily determined level that is a function of the type and size of the household. It imposes a greater percentage of taxation on higher income levels, operating on the theory that high-income earners can afford to pay more. As a result, such a flat marginal rate is consistent with a progressive average tax rate. Proportional tax rates that are applied to lower-income categories will also be more progressive if personal exemptions are declared. A progressive tax is a tax imposed so that the tax rate increases as the amount subject to taxation increases. The opposite of a progressive tax is a regressive tax, where the tax rate decreases as the amount subject to taxation increases. Could Mario Kart Teach Us How to Improve Sustainability and Reduce World Poverty?