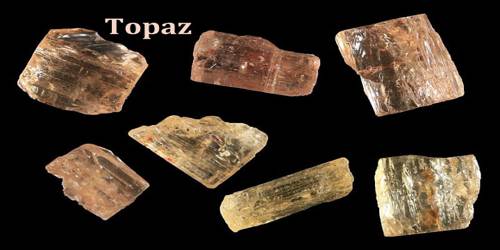 Topaz is a colorless, blue, yellow, brown, or pink orthorhombic mineral valued as a gem. Topaz occurs as transparent or translucent prisms in silica-rich igneous rocks, such as pegmatite, and in tin-bearing rock veins. Its chemical formula: Al2SiO4(F,OH)2. Topaz is a well-known gemstone sold in a wide variety of attractive colors. Some of these colors are natural, while others are produced by treating pale or colorless topaz with heat, radiation, or metallic coatings. 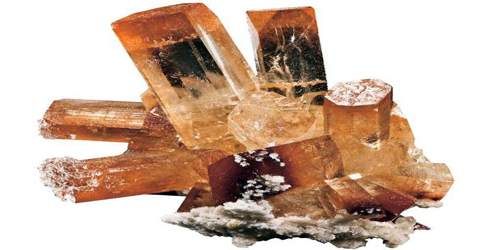 Topaz usually forms in fractures and cavities of igneous rocks such as pegmatite and rhyolite, late in their cooling history. It is also found as water-worn pebbles in stream sediments derived from those igneous rocks.

Topaz gets its name from the Greek word topazion, which may originate from the Sanskrit tapas, meaning, “fire.” The name might also come from the name of the Egyptian island of topazos (now St Johns island) in the Red Sea. The Latin writer Pliny the Elder used the island’s name for a yellowish green stone found there, and it soon became the name for most yellow stones. Topaz was once predominantly found there but is now also found in Brazil, Nigeria, Australia, Burma, and Mexico. Topaz is commonly associated with silicic igneous rocks of the granite and rhyolite type. It typically crystallizes in granitic pegmatites or in vapor cavities in rhyolite lava flows including those at Topaz Mountain in western Utah and Chivinar in South America.

Properties and Uses of Topaz

One of the best-known physical properties of topaz is its hardness. It has a hardness of 8 on the Mohs hardness scale. It also serves as the Mohs hardness scale index mineral for a hardness of 8. Topaz forms orthorhombic crystals, often with striations that parallel the long axis of the crystal. It also has a distinct basal cleavage that breaks perpendicular to the long axis of the crystal. It has a specific gravity that ranges between 3.4 and 3.6. This is quite high for a mineral composed of aluminum, silicon, and gaseous elements. 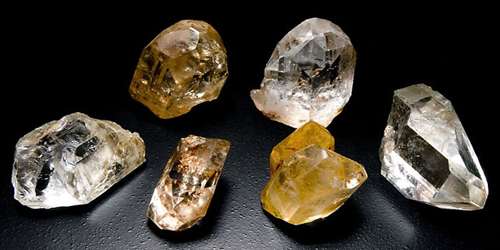 The most valuable colors of Topaz are the golden orange-yellow type, called Imperial Topaz, and the dark pinkish-red and orange-red colors. Value increases with a deepness of color in orange and reddish hues. The most commonly used colors of Topaz in jewelry are the blue types. It was not until this past century that blue Topaz became widespread on the gem market, since virtually all blue gem Topaz is irradiated and heat treated. 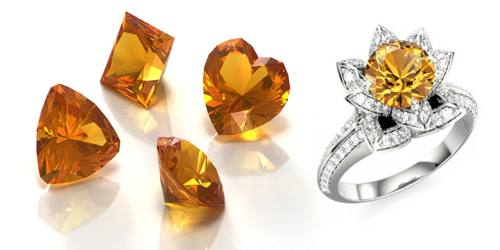 Topaz is used to promote good fortune. In fact, it has been said that dreaming of topaz may indicate that good fortune is on its way. These dreams can also suggest love affairs. It has been said to be of great use for protection against a wide variety of problems from emotional difficulties to fires and accidents. 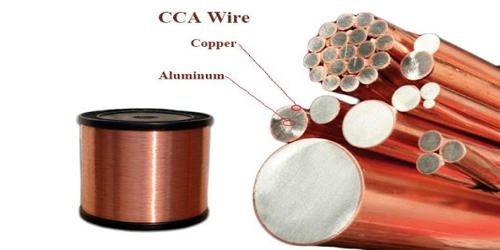