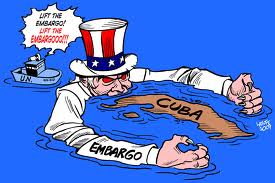 The U.S Embargo of Cuba

The U.S embargo of Cuba is the longest and harshest embargo by one country against another in present world. When Castro overthrew the Batista govt. in 1959 and threatened to incite revelations elsewhere in Latin America, the US starts to show a negative relation with Cuba. US immediately canceled its agreement to buy Cuban sugar and the oil companies refused to supply crude oil to Cuba. Then US imposed enemies Act 1962 and severed diplomatic relations and initiated a full trade embargo of Cuba. In addition, treasury Department set different regulations on U.S and Cuban trade. Congress passed the Cuban democracy Act in 1992 and Helms-Burton Act in 1996, which confide the ban on American travel to Cuba and tightened legal action to firms who trade with Cuba. Over time, sympathy to US role in Cuba has started to decline and countries began trading with Cuba. In 2000, Congress passed the export enhancement act, which allowed certain exports of US agriculture, food, and medical products to Cuba. In spite of, many countries had supported the embargo; by 2001 some 150 nations had normal trade relations with Cuba. However, the US public has been divided on the usefulness of the embargo on Cuba. Many people fell that repealing the embargo would help many US industries and companies as well as potential gains for tourism and transportations companies. On the other hand, many argued that the Cuban market opportunities are limited and Cuban population did not amount to much purchasing power. A continuous argument that, in an age when China is a member of WTO and nations like Vietnam are trading with the US, the Cuban embargo looks like a cold war relies.

Human resource is a sector, which can play a vital role in economic condition. Cuba with their highly qualified human force can take the highest advantage while entering into foreign markets.

A country with high conflict and politics may face huge problems in entering into foreign markets. Other countries imposed some tight regulations on such countries. The same case is seen in U.S and Cuban relation. Therefore, Cuba cannot enter into U.S market as well as many other countries.

Foreign competition is always considered as danger for local producer. As Cuba has high conflict and political problems many countries may not want to come in Cuba.

Expand into Foreign market requires some resources. Cuba is not enriching with such resources and dependent on other countries for their basic requirements, which is considered one of great problem for Cuba. So, it looks tough for Cuba to enter into foreign markets.

Strong leaders can influence other country through his/her leadership capability. The combination of strong leadership and sympathy from nations around the world bring lots of benefits and helps to economic growth as well.

Due to high political conflict and regulations firms cannot operate their business frequently. In addition other countries sometime impose barriers to entry to the country, which has high conflict and politics. Therefore, Economy of that country starts to decline.

Ans to the question no.01

From our simple viewpoint, we can illustrate that it is not possible to make the world a better place for doing business without the co-operation between each and every countries. We can also say that in an age when China is a member of WTO and nations like Vietnam are trading with the U.S, the Cuban embargo is considered as Cold war relic, which is no longer relevant in today’s world. In spite of such condition U.S trade embargo can be tightened through presenting the statement that Cuba using expropriated property that American people had owned, which is considered as unaccepted behavior. In addition, the development of Cuban forces to overthrow regimes the U.S supported is considered as violating human rights, thus trade sanction against Cuba can be cultivated.

Taking everything in account, we can say that there is a probability that Castro may be overthrown if the Cuban economy can be further weakened.

Ans to the question no.02

The most important reason for normalizing business with Cuba is, in modern history Cuban embargo is the longest and harshest embargo by one country against another. In addition there are several reasons behind normalizing the business relation. Such as; repealing the embargo would help many U.S companies and industries. On the other hand, due to embargo U.S firms are loosing the chance of selling their products in Cuba. Moreover, others suggest that lifting the trade embargo would increase U.S agricultural

exports to Cuba and also cited about the potential gains for U.S tourism and transportation. However, U.S government may ask Cuba to return the American property which was expropriated.

Ans to the question no.03

Without any doubt for both economical and political purpose I must want to build a friendly relation with U.S. as Cuban exports of sugar, tobacco, heavily dependent on US,  I wish to start trade and exchange resources  with US. In addition, rigidity should be decreased between both of us which make the trade relation more comfortable. Mutual interest should exist to get economical benefit from US. Moreover, establish bilateral relationship can be another proposal which can also contribute a lot for Cuban economy. Besides, general meetings, economic assistance, regular business contact are other options which can influence Cuban economic growth. Finally, sustain in political position through negotiation with US can be the best option as a Cuban leader.

Ans to the question no.04

The structure and relationships of the American political system serve the tendency to exist the trade embargo on Cuba. The key influencing people of U.S government wish to cultivate the specific embargo. They want to destruct the Cuban Communism and establish democracy within Cuba.