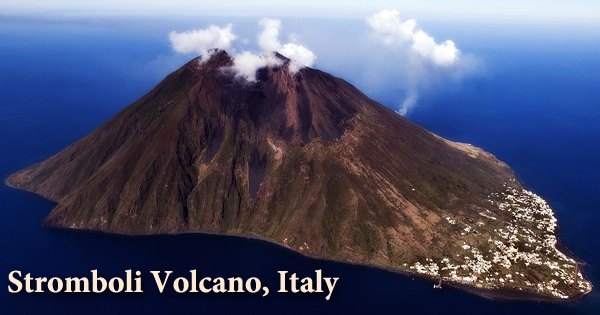 Stromboli (/ˈstrɒmbəli/ STROM-bə-lee, Italian: ˈstromboli; Sicilian: Struògnuli (ˈʂː(ɽ)wɔɲɲʊlɪ); Ancient Greek: Στρογγύλη, romanized: Strongýlē) is one of the world’s most active volcanoes, erupting nearly continuously since 1932. Mount Stromboli, one of Italy’s three active volcanoes, is located off the north coast of Sicily on an island in the Tyrrhenian Sea. Stromboli is one of seven volcanic islands that make up the Aeolian archipelago off Sicily’s northern coast and is known as the “lighthouse of the Mediterranean” for its constant towering glow. It is one of the world’s most active volcanoes, despite being about a fifth the size of Manhattan and rising only 3,031 feet above sea level. It has spewed lava fountains practically constantly for over 2,500 years.

Stromboli, a volcano off the coast of southern Italy, is one of the world’s most visited volcanoes. It is one of the eight Aeolian Islands, located north of Sicily in a volcanic arc. People thought that here was where Aeolus resided, according to Strabo. Stromboli and its adjacent islands were designated as a UNESCO World Heritage Site in 2000 because of their importance to volcanology. The island is 12.6 square kilometers (4.9 square miles) in size and is located on the upper third of the volcano, which is above sea level and forms an island.

Stromboli is famous for its dramatic eruptions, which shoot molten rock fountains from its lava-filled central crater. Strombolian explosions at both summit craters, ash plumes, and SO2 plumes have been recent features of the current eruption phase, which began in February 1934. Geologists use the term “Strombolian” to clearly characterize comparable eruptive behavior at other volcanoes because these eruptions are so unique and well-known. Its name comes from the Ancient Greek word Strongýlē, (Στρoγγύλη), which was derived from στρογγύλος (strongýlos, “round”), in reference to the volcano’s spherical, conical shape when viewed from afar.

Stromboli, like Mount Etna on Sicily’s island, is part of the Calabrian volcanic arc. The Calabrian arc volcanoes are linked to the sinking of the African tectonic plate beneath the Eurasian plate. The majority of its activity is comprised of short and tiny bursts of incandescent lava particles rising 100-200 meters above the craters. Much larger explosions or periods of continuous activity can occur on rare occasions. Stromboli is situated on a NE-SW fault system, although little is known about the mechanisms that feed the volcano’s magma chamber, as well as their link to the fault system.

Boatloads of visitors come here every summer for the sparkling black-sand beaches, and up to 500 people climb to the island’s top each sunset to see the lava pyrotechnics against the night sky. Stromboli is 926 meters (3,038 feet) above sea level and over 2,700 meters (8,860 feet) above sea level on average. The island is 12.6 square kilometers (4.9 square miles) in size and is located on the upper third of the volcano, which is above sea level and forms an island. About 200,000 years ago, the first eruptions occurred, forming the now-eroded Strombolicchio volcano. The actual island of Stromboli began to develop approximately 160,000 years ago.

At the summit, there are three active craters. The Sciara del Fuoco (“stream of fire”), a large horseshoe-shaped depression formed by multiple collapses on the northwestern flank of the cone over the last 13,000 years, is a prominent geological feature of the volcano. Lava flows and pyroclastic deposits created a stratovolcano during the following 150,000 years, which was finally buried by pyroclastic deposits, lahars, and lava flows. During the Neostromboli epoch, the current volcanic edifice was formed, which included multiple sides and summit caldera collapses.

The most severe eruptions in the last 100 years, such as those in 1919, 1930, and 5 April 2003, were large enough to kill people and destroy property even at a great distance from the craters, such as inside populated regions. The present eruptive vents occur at the head of the Sciara del Fuoco (Fire Stream), a huge collapse scar on the island’s northwest side that originated around 5,000 years ago. Mild to moderate eruptions of incandescent volcanic bombs, a form of tephra, occur at intervals ranging from minutes to hours, maintaining an eruption pattern in which explosions occur at the summit craters.

Effusive eruptions with lava output occur at irregular periods ranging from a few years to decades, in addition to explosive activity. The most recent one lasted from December 28, 2002, to July 3, 2003. Stromboli is the epicenter of the “Strombolian” eruption style. Strombolian eruptions are low-intensity explosive occurrences in which “slugs” of gas ascend through a magma-filled volcanic conduit, explode near the surface, and hurl lava fragments into the air. Lava falls in the form of bombs (greater than 3 inches) and scoria (smaller bits), eventually forming a steep-sided volcanic cone.

This volcano’s volcanic gas emissions are monitored using a multi-component gas analyzer system, which identifies pre-eruptive degassing of ascending magma and improves volcanic activity prediction. It created a minor tsunami by causing an avalanche of gas and rock particles. At about 16:46 local time on July 3, 2019, two significant explosive events occurred, coupled with 20 smaller explosive events identified by Italy’s National Institute of Geophysics and Volcanology. The volcano was declared unstable by Italy’s Civil Protection Agency, and entry over 950 feet, approximately one-third of Stromboli’s elevation, was restricted.

On Stromboli, the Sciara del Fuoco is the most dangerous volcano. A catastrophic sector collapse would not only move enormous amounts of material and perhaps expose dike systems on the volcano’s NW slope, but it would also trigger a tsunami, which might cause significant damage if it reached any of the other Aeolian islands or the Sicilian shore. An explosive eruption on August 28, 2019, at 10:16 a.m. local time, propelled a pyroclastic flow down the volcano’s northern side and into the sea, where it continued for hundreds of meters until collapsing. The ash column that resulted rose to a height of 2,000 meters (6,600 ft).

Visitors to Stromboli have a one-of-a-kind opportunity to see its eruptions. A great viewing terrace may be found on the rim of an older crater, which is only 150-250 meters above the active craters. When a series of powerful blasts erupted on the island, some visitors were standing very near to the volcano’s active vent, and multiple deaths were reported. Despite the fact that the eruption was not very spectacular, the closeness of visitors on the island that day resulted in what one volcanologist characterized as “possibly the worst-case situation.”