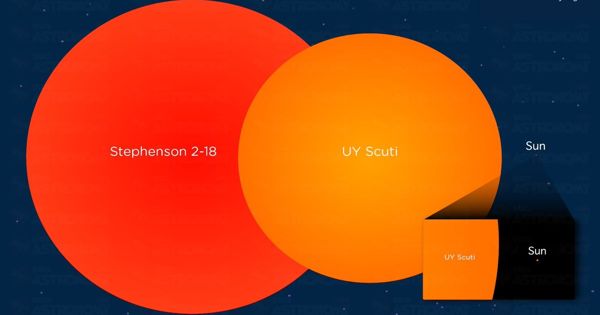 The star is located at a distance of 18,900 light-years from Earth. It is among the largest known stars, and one of the most luminous red supergiants, with an estimated radius around 2,150 times that of the Sun (R☉), which corresponds to a volume nearly 10 billion times bigger than the Sun. It is likely situated at the intersection of the northern end of the Long Bar of the Milky Way and the inner portion of the Scutum–Centaurus Arm—one of the two major spiral arms. If placed at the center of the Solar System, its photosphere would engulf the orbit of Saturn. If it replaced the Sun in our solar system, it would extend past the orbit of Saturn (1,940 – 2,169 R☉). The star’s size corresponds to a volume about 10 billion times greater than the Sun.

The open cluster Stephenson 2 is one of the most massive open clusters in the Milky Way. It is also one of the most luminous red supergiants known. With a surface temperature of 3,200 K, it shines with about 440,000 solar luminosities. has a radial velocity about 20 km/s below that of the other cluster stars, which indicates that it is not a foreground giant. It may be a cluster member and its observed radial velocity is offset by a thick expanding envelope.

St 2-18 shows the traits and properties of a highly luminous and extreme red supergiant, with a spectral type of M6, which is unusual for a supergiant star. It is one of the largest stars ever discovered, with a radius of 2,150 solar radii. This places it at the top right corner of the Hertzsprung–Russell diagram. The cluster cannot be detected in visible light at all because it is heavily obscured by dust, but it can be seen in infrared light.