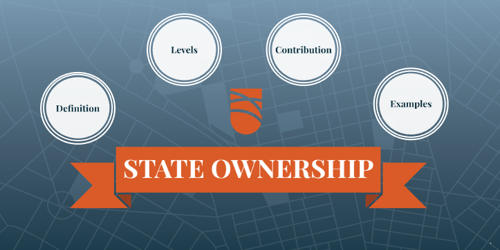 Public ownership can take place at the national, regional, local, or municipal levels of government; or can refer to non-governmental public ownership vested in autonomous public enterprises. A government-owned corporation may resemble a not-for-profit corporation as it may not be required to generate a profit. Public ownership is one of the three major forms of property ownership, differentiated from private, collective/cooperative, and common ownership. Governments may also use profitable entities they own to support the general budget.

State-owned enterprises (SOEs) are an important element of most economies, including many more advanced economies. It can be either wholly or partially owned by a government and is typically earmarked to participate in specific commercial activities. SOEs are most prevalent in strategic sectors such as energy, minerals, infrastructure, other utilities, and, in some countries, financial services. A government-owned corporation is a legal entity that undertakes commercial activities on behalf of an owner government. Their legal status varies from being a part of the government to stock companies with a state as a regular stockholder. SOEs receive financial support from the government. SOEs are known for receiving access to favorable policies such as – tax breaks on certain products. Lower interest rates on loans from state-owned banks.

In market-based economies, state-owned assets are often managed and operated as joint-stock corporations with a government owning all or a controlling stake of the company’s shares. In primarily market-based economies, government-owned assets are often managed and run like joint-stock corporations with the government owning a controlling stake of the shares. This form is often referred to as a state-owned enterprise. A state-owned enterprise might variously operate as a not-for-profit corporation, as it may not be required to generate a profit; as a commercial enterprise in competitive sectors; or as a natural monopoly. Governments may also use the profitable entities they own to support the general budget. The creation of a state-owned enterprise from other forms of public property is called corporatization. The creation of a government-owned corporation from other forms of government ownership may be a precursor to privatization.