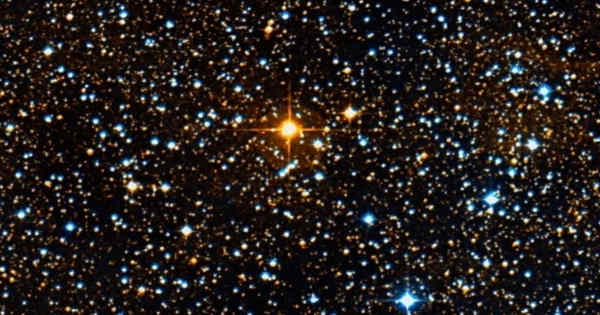 KW Sagittarii – a Red Giant Star in the Sagittarius Constellation

KW Sagittarii is a red giant star in the constellation Sagittarius. It is a Supergiant Star with a high luminosity. It is 1,009 times the size of the Sun. It is about 1,900 parsecs away from our Sun, in the direction of the constellation Sagittarius. It is one of the brightest stars known. The surface of the star would engulf Mars if it were placed in the center of the Solar System.

The constellation Sagittarius is located in the southern sky. It is one of the zodiac constellations. It symbolizes the archer. The Right Ascension (R.A.) and Declination (Dec.) of a star in the night sky are equivalent to Longitude and Latitude on Earth.

A study of photographic plates revealed that KW Sagitarii was variable in 1928. Its brightness varies erratically over a two-magnitude range. It is classified as a semiregular variable, despite the fact that the listed period of 670 days is not well defined. The unusual cool spectrum has prompted comparisons with symbiotic variables, but it is no longer thought to be a cataclysmic binary.

The assumption of membership in the Sagittarius OB5 association yields a distance of 2,420 parsecs. Because the parallax derived from the Hipparcos mission is negative, it provides little information about the distance other than the fact that it is likely to be large. The parallax for Gaia Data Release 2 is 0.52810.1392 mas, implying a distance of approximately 1,900 pc. A distance of 1,945+1039-511  pc is calculated using a prior based on known galactic structure. The Gaia result has a significant statistical margin of error, as well as an indication that the astrometric excess noise is far above acceptable levels, making the parallax unreliable.

KW Sagittarii is classified as a luminous cool supergiant with a spectral type ranging from M0 to M4. Using a MARCS model, a 2005 study led by Levesque calculated a high luminosity of 363,000 L for KW Sgr and, as a result, a very large radius of 1,460 R based on the assumption of an effective temperature of 3,700 K at a distance of 3,000 pc. The star was then described as one of the four largest and brightest galactic red supergiants, along with V354 Cephei, KY Cygni, and Mu Cephei.

Over its variable period, the brightness of KW Sagittarii ranges from 8.692 to 8.413 magnitude. The brighter the star, the lower the magnitude. It has a variable/pulsating period of 0.3 days (variability).

Based on the measured angular diameter and luminosity, KW Sagittarii was calculated to have a lower bolometric luminosity of around 200,000 L and a radius of around 1,009 142 R.