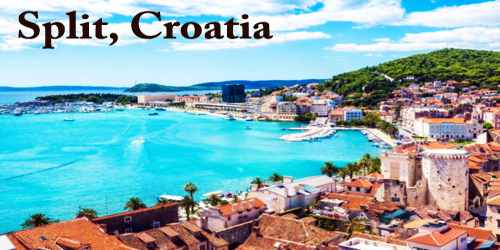 However, Split is so much more than just a pretty face with millions of adoring fans. Who, by the way, floods the tiny center of Dubrovnik every year making it difficult to fully appreciate the beauty in high season.

It is the second-largest city of Croatia and the largest city of the region of Dalmatia, with about 250,000 people living in its urban area. It lies on the eastern shore of the Adriatic Sea and is spread over a central peninsula and its surroundings. An intraregional transport hub and popular tourist destination, the city is linked to the Adriatic islands and the Apennine peninsula.

A major commercial and transportation center, the city is best known for the ruins of the Palace of Diocletian (built 295–305 CE). Collectively with the historic royal residences, fortifications, and churches in the city, the palace was designated a UNESCO World Heritage site in 1979.

Venice eventually prevailed and during the early modern period Split remained a Venetian city, a heavily fortified outpost surrounded by Ottoman territory. Its hinterland was won from the Ottomans in the Morean War of 1699, and in 1797, as Venice fell to Napoleon, the Treaty of Campo Formio rendered the city to the Habsburg Monarchy. In 1805, the Peace of Pressburg added it to the Napoleonic Kingdom of Italy and in 1806 it was included in the French Empire, becoming part of the Illyrian Provinces in 1809. After being occupied in 1813, it was eventually granted to the Austrian Empire following the Congress of Vienna, where the city remained a part of the Austrian Kingdom of Dalmatia until the fall of Austria-Hungary in 1918 and the formation of Yugoslavia.

In World War II, the city was annexed by Italy, then liberated by the Partisans after the Italian capitulation in 1943. It was then re-occupied by Germany, which granted it to its puppet Independent State of Croatia. The city was liberated again by the Partisans in 1944 and was included in post-war Socialist Yugoslavia, as part of its republic of Croatia. In 1991, Croatia seceded from Yugoslavia amid the Croatian War of Independence. 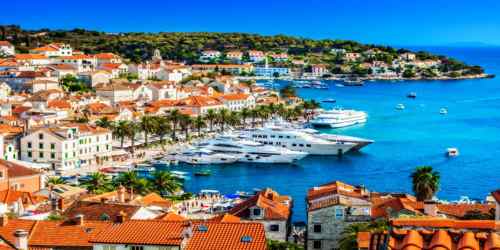 Split in the Roman Empire – It took ten years to build this magnificent palace and Diocletian lived there until he died in 313 AD. After his death, many Roman rulers continued to use it as a retreat although by the later part of the 6th century it had fallen into disrepair.

In the 7th century, when the Roman colony of Salona (Solin) was abandoned, many of its inhabitants sought sanctuary behind the palace’s high walls and their descendants continued to live there over the centuries.

Split in Venetian Rule – During the 11th century and after, the city of Split grew considerably in the areas around the palace. The city enjoyed a good degree of autonomy between the 12th and 14th centuries before it was conquered by the Venetians in 1420.

Split in the 20th Century – In the 20th Century, after the breakup of the Austro-Hungarian Empire, Split became a part of the Kingdom of Serbs, Croats, and Slovenes that was formed in 1918. Much of its development occurred after 1920 when Zadar, Dalmatia’s official capital, became an Italian enclave and Split took its place as the main city in the region.

In 1941, the city was occupied by the Italians and a very strong resistance movement soon evolved with the city first being liberated in 1943, after the capitulation of Italy. Although then becoming occupied by Germany, it was finally in October of 1944 that Split was liberated again when the first people’s government of Croatia was formed. On 12 February 1945, the Kriegsmarine conducted a daring raid on the Split harbor, damaging the British cruiser Delhi. After the war, the remaining members of the Italian community in Split left Yugoslavia towards Italy (Istrian-Dalmatian exodus).

After World War II, Split became a part of the Socialist Republic of Croatia, itself a constituent sovereign republic of the Socialist Federal Republic of Yugoslavia. During the period the city experienced its largest economic and demographic boom. Dozens of new factories and companies were founded with the city population tripling during the period. The city became the economic center of an area exceeding the borders of Croatia and was flooded by waves of rural migrants from the undeveloped hinterland who found employment in the newly established industry, as part of large-scale industrialization and investment by the Yugoslav Federal Government.

Split had a large shipbuilding industry that saw Yugoslavia become one of the top countries in the world in that field; the city also became an important port. Split did not suffer much damage during the war that broke out in 1991, despite the Yugoslav Navy and the Yugoslav Army’s coastal district being based there. Since Croatia’s independence, Split suffered as its once strong industry entered into decline. However, it has recovered somewhat in recent years.

In the years following 2000, Split finally gained momentum and started to develop again, with a focus on tourism. From being just a transition center, Split is now a major Croatian tourist destination. Many new hotels are being built, as well as new apartments and office buildings. Many large development projects are revived, and new infrastructure is being built. An example of the latest large city projects is the Spaladium Arena, built-in 2009.

The growth of the port facilities dates from the temporary loss of Rijeka (Fiume) to Italy in 1924 (recovered 1945). During World War II those facilities were wrecked by the Germans and by Allied bombing, but the old town was little damaged, and repairs were subsequently made. In 1995 the city celebrated the 1,700th anniversary of the initiation of construction of the Roman palace.

Built within the palace is the nucleus of the “old town.” The immense complex has walls 7 feet (2 meters) thick and 72 feet (22 meters) high on its seaward side and 60 feet (18 meters) high on the northern side. Originally it had 16 towers (of which 3 remain) and 4 gates. A tree-lined promenade now keeps the Adriatic from lapping against the south walls as it once did. The palace was damaged by the Avars, who sacked nearby Solin (Salona) about 614; its inhabitants first fled to the islands but then returned to seek refuge in the palace (c. 620), calling the settlement Spalatum. They built their homes within the seven-acre (three-hectare) palace compound, incorporating its walls and pillars.

The area within the walls of the palace has been continuously inhabited since it was built. It contains buildings and embellishments of medieval, Renaissance, and Baroque periods, as well as fine examples of Roman architecture. Efforts have been made not only to excavate further the Roman remains and identify and elucidate remains of the early medieval period but also to preserve the eclectic architecture of the complex. The palace is still thought of by the inhabitants of Split as the city center and not a museum: The cathedral and baptistery are in use, the peristyle court is a popular meeting place, shops occupy the Roman arcades, and the main market is just outside the east gate of the palace. Tourists can see architectural remains of all periods from Roman times onward while walking under the laundry lines of the modern citizens. 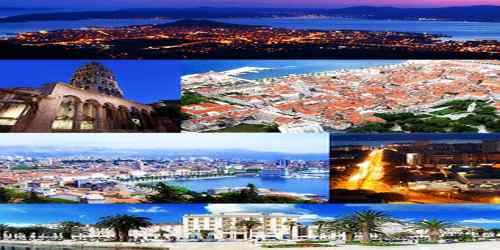 Split is situated on a peninsula between the eastern part of the Gulf of Kaštela and the Split Channel. The Marjan hill (178 meters (584 ft)), rises in the western part of the peninsula. The ridges Kozjak (779 meters (2,556 ft)) and its brother Mosor (1,339 meters (4,393 ft)) protect the city from the north and northeast and separate it from the hinterland.

Split has a Mediterranean climate (Csa) in the Köppen climate classification. It has hot, moderately dry summers and mild, wet winters, which can occasionally feel cold, because of the strong northern wind Bura. The average annual rainfall is more than 820 mm (32.28 in).

Split has a university (1974) and an oceanographic institute. Museums include the Meštrović Gallery (opened 1952), devoted to the works of the Croatian sculptor Ivan Meštrović; the Archaeological Museum (founded 1820), housing artifacts from the ruins of Solin and other nearby sites; the Museum of Croatian Archaeological Monuments (1893, in Knin), which has notable exhibits on the Early Middle Ages; the City Museum (1946); the Art Gallery (1931); and the Ethnographic Museum (1910), which is housed in the Venetian Gothic town hall. The Croatian National Theatre, built from 1891 to 1893, was gutted by fire in 1971 but reconstructed by 1979. The belfry (c. 1100) of Our Lady of the Belfry church is the oldest in Dalmatia.

According to the 2011 census, the city of Split had 178,102 inhabitants. Ethnically, Croats make up 96.23% of the population, and 86.15% of the residents of the city are Roman Catholics. The wider urban area of Split has 293,298 inhabitants, while there are 346,314 people in the Split metropolitan area. The urban area includes the surrounding towns and settlements: Okrug, Seget, Trogir, Kaštela, Solin, Podstrana, Dugi Rat, and Omiš, while the metro area adds Marina, Primorski Dolac, Prgomet, Lećevica, Klis, Dugopolje, Dicmo, Trilj, and Sinj. The entire Split-Dalmatia County has 454,798 residents, and the whole region of Dalmatia just under a million.

The city’s harbor and port, combined with its central position on the Adriatic coast and its good rail and road connections to the northern parts of the country, have made it important commercially. There is a large shipyard, and plastics, chemicals, aluminum, and cement are produced. Several island ferries depart from Split, and the city has an international airport.

In Split visitors can explore the historic center of Diocletian’s Palace, stroll along the modern Riva waterfront, relax at the sandy beaches, hike through Marjan Forest Park and eat at charming fresh seafood cafes or gourmet restaurants.

In other words, Split offers a little of everything and all at a still fairly reasonable price. Add to this the fact that Split is located perfectly for exploring other Croatian sights such as Hvar, Krka Falls, Plitvice Lakes National Parks, and Trogir, and it becomes a true winner, topping the list of the best places to visit in Europe.