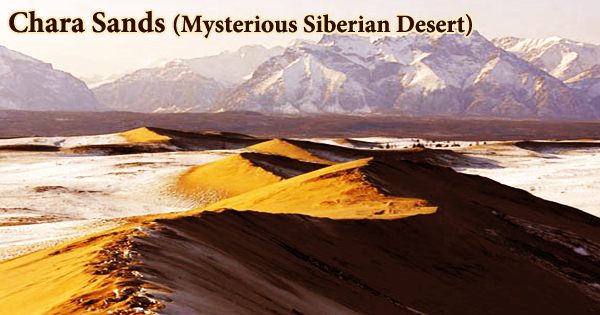 The Chara Sands is a sand massif in Zabaykalsky Krai’s northwestern corner that is a federally protected geological natural monument. It’s a sand dune region in the Kodar and Udokan mountain ranges in Siberia. It’s a tiny desert in the Charsk basin between the Chara, Middle Sakukan, and Upper Sakukan rivers, measuring 3 kilometers broad by 6 kilometers long. The Chara Sands is bordered by ice fields and frozen blue lakes and are located at the base of snow-capped mountains.

Sands are used to creating ridges, dunes, and dunes chains. Several dunes have a length of 150-170 meters and a height of up to 80 meters. The Chara Sands resembles the Central Asian deserts on the surface. Such a vast volume of loose shifting sands can be found nowhere else in the Siberian tundra. The Chara Sands were photographed in natural color by Landsat 8’s Operational Land Imager (OLI) on July 11, 2013. The sand field looks to be tan in color. The neighboring woodlands are lush with life. The ridges of dunes are the crescent-shaped lines in the sand field.

One of the features of this remarkable location, aside from the wandering sand dunes and the oasis that form amid them, is the quick shift from pine and larch woods and peat bogs to sand with no transition zone. During the Muruktin glacial era, the Chara Sands are thought to have originated around 55 to 100 thousand years ago. The Chara region was a lake delta in front of the Sakukan glacier during the time, therefore it was flooded. Wind erosion created the blown sand dunes and the lovely swirls visible today during the Holocene epoch.

The Chara Sands, which are the remains of an ancient lake produced by the outflow from the Sakukan glacier, is thought to have developed during the last glacial epoch 55 to 100 thousand years ago. Despite its rarity, the Chara Sands attract just a small number of travelers. The infrastructure in the neighboring villages is inadequate, it takes a long time to get here, and the air temperature can drop to minus 50 degrees Celsius in the winter.

But it is exactly because of this that the Chara Sands is a protected region where everything is amazing. The Chara Basin is not a real desert, despite its dryness. The area receives around 35 centimeters (14 inches) of rain each year, with most of it falling during the summer. Though several definitions exist, one of the most widely recognized is that deserts get less than 25 centimeters (10 inches) of rain every year.

Chara Sands is located around 6 kilometers from Chara, the district capital. The region may be reached via plane or train. Many hiking excursions in the Kodar Mountains, home to the only glaciers in southeast Siberia, begin at Chara. Surprisingly, winter is the best season to visit since it is simpler to cross the rivers that separate the desert from the nearest communities. Because the ice is so thick, it can easily hold the car’s weight.

The Chara Sands are a spectacular sight against the backdrop of the frigid mountains. The mountains that frame this unusual scene are blanketed with snow all year, providing a stunning contrast. The glaciers of the Kodar range provide insight into the origins of this strange sand patch.

During the last glacial maximum about 20,000 years ago, the Kodar possessed more glaciers than it does now. Geologists think that one or more glaciers blocked the Chara River when it left the Chara Basin and reached the Kodar range at this time. In one portion of the basin, a glacier lake has developed. The two and three-kilometer ridges and dune sands crisscross over the wide area, making travel across this mini-desert difficult. The most strong dunes are in the center, and they resemble frozen waves.

Climbing to the edge of one of these enormous waves will reward you with a breathtaking vista of sand dunes reaching all the way to the horizon. Until mid-April, the Chara Sands are blanketed with snow. Snowflakes leave fanciful decorations on the golden sand as it melts. During earlier glacial periods, geologists think the lake may have been even larger.

According to Swedish researchers that studied the geological history of the area using data from Landsat 7 and the Shuttle Radar Topography Mission, the Chara Sands were most likely deposited as part of a delta left by a river as it entered this lake. Jesse Allen and Robert Simmon created this NASA Earth Observatory picture using Landsat data from the US Geological Survey. Adam Voiland drew the illustration. Felix Bossert deserves special recognition for being the puzzler’s fastest solver. Also, kudos to Robert Emberson for giving fascinating facts about the dunes’ geologic history.