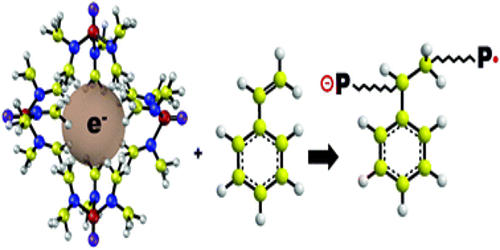 A solvated electron is a free electron in (solvated in) a solution and is the smallest possible anion. They are typically generated by radiolysis or photoionization of molecules in solutions. Solvated electrons occur widely, although it is difficult to observe it directly since their lifetimes are so short. The deep color of solutions of alkali metals in ammonia arises from the presence of solvated electrons: blue when dilute and copper-colored when more concentrated (> 3 molars). In liquid ammonia, it is possible to get a solvated electron. If you dissolve sodium metal in liquid ammonia (very cold), the sodium will give up the electron, which will then become surrounded by the positive end (ammonia is polar) of several ammonia molecules.

The solvated electron is responsible for a great deal of radiation chemistry. The solvated electron was observed for the first time almost 40 years ago in water by pulse radiolysis measurements through its strong visible absorption band. The reduction of halogenated materials from soils, oily wastes, sludge, and sediments requires removal of moisture through pre-drying. Liquid ammonia reacts quickly with water to form ammonium hydroxide, which inhibits the production of solvated electrons.

In the Solvated Electron Treatment (SET) process, a mixture of anhydrous ammonia and sodium metal creates solvated electrons. In general, solvated electrons are formed when certain alkaline earth metals (e.g., sodium, calcium, lithium, and potassium) are dissolved in ammonia and form metal ions and free electrons. Alkali metals dissolve in liquid ammonia giving deep blue solutions, which are conducting in nature. The blue color of the solution is due to ammoniated electrons, which absorb energy in the visible region of light. Alkali metals also dissolve in hexamethylphosphoramide, forming blue solutions.

Focusing on ammonia solutions, all of the alkali metals, as well as Ca, Sr, Ba, Eu, and Yb (also Mg using an electrolytic process), dissolve to give the characteristic blue solutions. Other amines, such as methylamine and ethylamine, are also suitable solvents.

The blue dots are electrons surrounded by tetrahydrofuran molecules. This solvated state is unstable and ephemeral. The slightest number of water molecules will quench the sight.